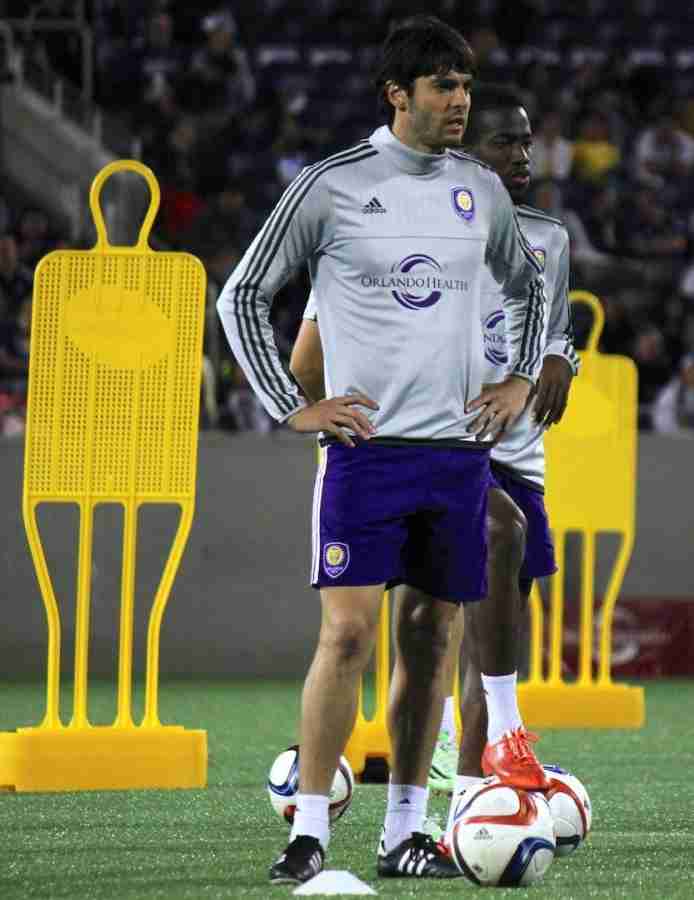 Orlando City midfielder Kaka told manager Adrian Heath that he had only played on artificial turf once before in his career.

ORLANDO — Orlando City SC had their first chance to try out turf at the new Orlando Citrus Bowl on Saturday when they held an open training that saw thousands of fans turnout .

Kaka, Kevin Molino and other Orlando City players ran through an hour long practice that coach Adrian Heath compared to a run through before a game. The club ran multiple drills while trying their best to impress a crowd that was seeing a Florida MLS team on the pitch for the first time since 2001.

Fans were exited to get their first glimpse of Kaka on the pitch and even oohed and awed every time the former FIFA Player of the Year took a shot. Kaka also didn’t disappoint fans after the training session, as the Brazilian midfielder signed autographs for over an hour, making sure to sign every thing he possibly could before going back into the locker room.

Orlando City has one month remaining before their season opener against New York CIty FC on March 8 at the Citrus Bowl, so Saturday’s training session was the first opportunity the club had to practice on the new artificial turf.

“It won’t be too bad by the time we get it watered,” said Heath of the turf. “We’ll probably have another three or four sessions on here before we play on March the 8th.”

Heath added that Kaka has only played on turf once before in his career, but doesn’t foresee it being a problem.

The Lions have a closed-door scrimmage scheduled for Sunday against Toronto FC before continuing their regular training schedule on Monday.

Orlando City launched their “Fill the Bowl” campaign and saw the support during open training as a positive sign that 60,000 fans in the Citrus Bowl on opening day is an obtainable goal.

Playing in the Citrus Bowl this season will be a homecoming of sorts, as the club played in the venue for three seasons before the renovations forced them to move to Disney in 2014.

“It’s great to be back in our home, this is where we won two championships,” said club president Phil Rawlins after training. “We love this stadium, it’s been a great stadium in the past and I know in 2015 it’ll be a great stadium again.”