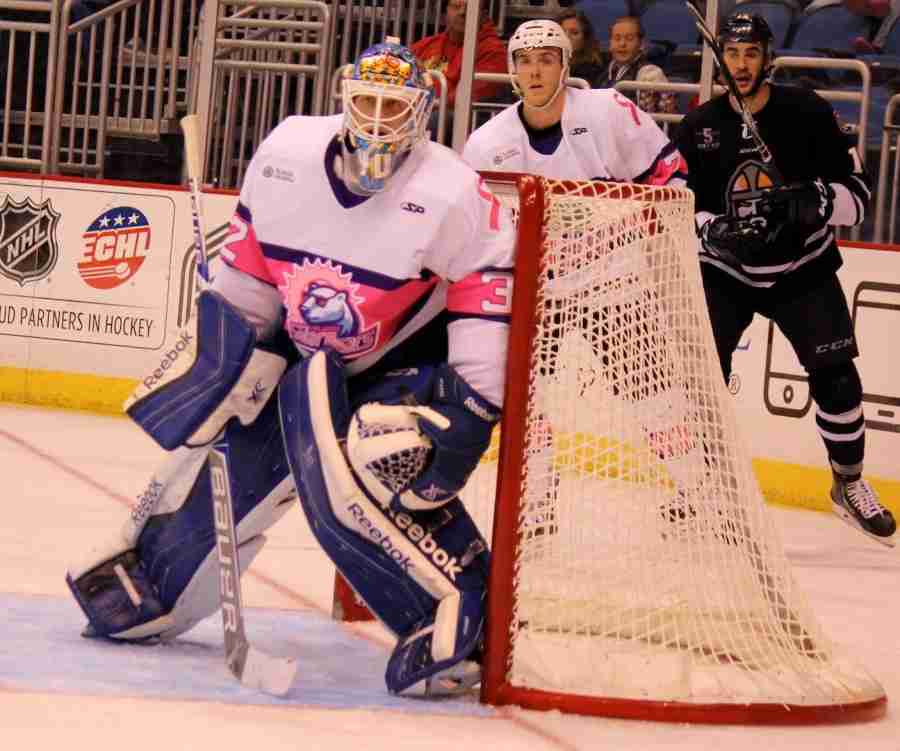 Garret Sparks had a season-high 50 saves on Saturday, giving him 98 saves over the last two games against Greenville.

ORLANDO — Jacob Cepis scored the game-winning goal in overtime as the Orlando Solar Bears defeated the Greenville Road Warriors 3-2 on Saturday at the Amway Center.

The Solar Bears came away with the win despite giving up a season-high 52 shots on net. They used another standout game from goalie Garret Sparks, who had a season-high 50 saves on the way to his eighth win between the pipes for Orlando.

“The guy’s played off the charts,” said Cepis of Sparks performance during the weekend series. “It’s just alway good to have that backstop. Goaltending wins games a lot of times, so he’s done really well.”

Orlando led for most of the game, but Greenville used back-to-back goals from Trevor Parkes in the third period to tie the game at 2-2 and send it into overtime for the second night in a row.

Cepis game-winner came 2:54 into the overtime period when he scored the Solar Bears lone power play goal of the game on an assist from Blake Kessel and Brett Findlay.

Marshall Everson scored the first goal of the game for Orlando early in the first period, giving him his first goal with the Solar Bears since being traded from Gwinnett last week. Orlando is 16-1-2-0 when scoring first this season and 14-1-1-0 when leading after the opening period.

“Scoring the first goal is big,” said Everson after the game. “Anytime you can have that 1-0 lead you want to take it and try to get the other team back on their heels.”

The Solar Bears extended their lead to 2-0 less than four minutes later when Stefan Della Rovere scored his eight goal of the season after the puck bounced off David Broll’s chin and landed near Della Rovere’s stick for the finish.

Parkes’ two third period goals sent the game to overtime tied 2-2, where Cepis tucked away the game-winner to give the Solar Bears their fourth win in a row.

“Guys aren’t satisfied,” said Solar Bears head coach Vince Williams following the game. “We know we’re giving up too many shots, we know our power play has to be better and as a group we have to be better and that’s our job as coaches to do that.”

With the victory Orlando’s record sits at 19-14-3-0 with 41 points, which puts them in a tie for fifth place in the East Division with South Carolina at the midway point of the season.

The Solar Bears next game will be against the South Carolina Stingrays on Tuesday, Jan. 27 at the Amway Center for the first of a two-game series against their inter division foe.

“Keep winning, keep winning by all means necessary,” said Williams about what the team needs to do to make the playoffs. “Obviously you want to do it the right way, we have to focus on South Carolina for two and just keep going and just get better.”