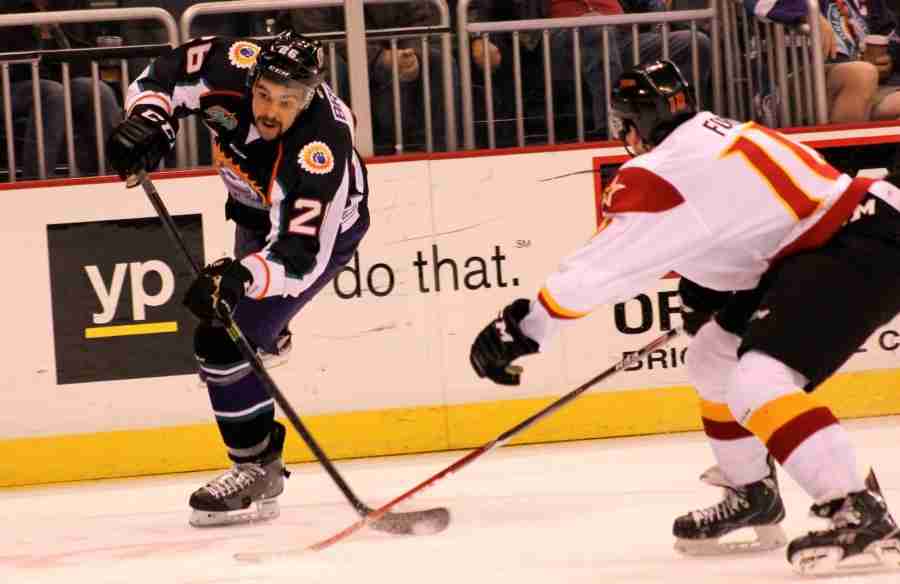 David Broll was +5 for the game in the Solar Bears win over Indy on Monday.

David Broll scored his first goal as a Solar Bear and assisted three more as Orlando defeated the Indy Fuel 7-2 on their home ice at the Amway Center on Monday, Dec.15 in front of an announced crowd of 4,855 fans.

Missing from the game was Solar Bears head coach Vince Williams who was absent due to his wife’s pregnancy, so assistant coach Danny Brooks took the helm and earned his first career win as a head coach.

“I thought the team had tremendous energy from the start of the game. I thought we played really well and I think it started at the pregame skate today. In the morning skate, guys were excited” said Brooks. “Guys were excited coming in to the game too, they played hard, every shift. They managed the puck very well. We did exactly what we wanted to do.”

Garret Sparks returns between the pipes after allowing two goals last week against the Elmira Jackals and allowing 18 goals during his nine games played with a .902 save percentage.

The Solar Bears erupted onto the ice taking control of the game early with a quick goal from Mike Ullrich that was assisted by Solar Bears veteran Jacob Cepis. Ullrich leads the team with 23 points.

Nick Larson would then set it in behind the goaltender with the assist by Broll in the third minute of play to earn Larson his second goal of the season in 13 games. Then only a minute later, Broll passed to Ben Rosen who scored on a slapshot between the legs of Fuel and former Solar Bear goaltender Cody Reichard.

Indy was able to answer with a goal of their own after Garret Sparks leaves Orlando’s net in an attempt to reach the puck before Fuel forward Robert Czarnik but fumbled with the pass and Czarnik escaped with the puck and was able to score on the empty net with 4:45 remaining in the period. Both teams ended the first period with 12 shots on goal each and headed to the locker room with the Solar Bears ahead 3-1.

Forward Stefan Della Rovere was able to score 3:08 into the second period with an assist by  Broll, his third assist of the night. Broll then earns his first goal in three games with the Solar Bears 12 minutes in with the assist by Rovere and Sparks, which was Sparks second of the year as goaltender.

“Unbelievable, we did some video stuff yesterday on how we thought he could improve his game and he needed to have a little bit more of a physical presence then he had at the last game.” said Brooks on newcomer Broll. “He was really physical tonight, he’s like a bulldozer out there, he’s a big man and if he can take the puck across the goal line and drive it to the net it’s going to open up some things.”

Indy was able to score with just over seven minutes remaining in the period with a goal by Dillon Fournier in an attempt to close the gap but still fell behind Orlando 5-2. Orlando out shot Indy 11-7 in the period.

The Solar Bears came off the bench sluggish in the third period unable to make a single shot on the net until a power play was forced by a slashing call on Fournier ten minutes into the period while Indy controlled the puck making 12 shots in that time.

“I just think they came with so much pressure, they were coming with everything plus the kitchen sink at us, and we knew that, we just had to make sure we managed the puck to the best of our ability.” said Brooks on the shot-less ten minutes. “Yes they had a lot of shots, but when you look at the quality of those shots… the bulk of the them were from outside home plate.”

With the game escaping their grasp Indy pulled their goalie with six minutes remaining in a desperate attempt to come back from behind but Orlando capitalized on the chance and Patrick Waitling scored on the empty net with an assist by Brady Vail. Indy responded by returning the goaltender to his post but the gesture was proved fruitless as Gleason Fournier scored with an assist from Cepis and increased their lead to 7-2.

The win marks the team’s fourth at home and puts Orlando tied with South Carolina at fourth in the East Division with 28 points.