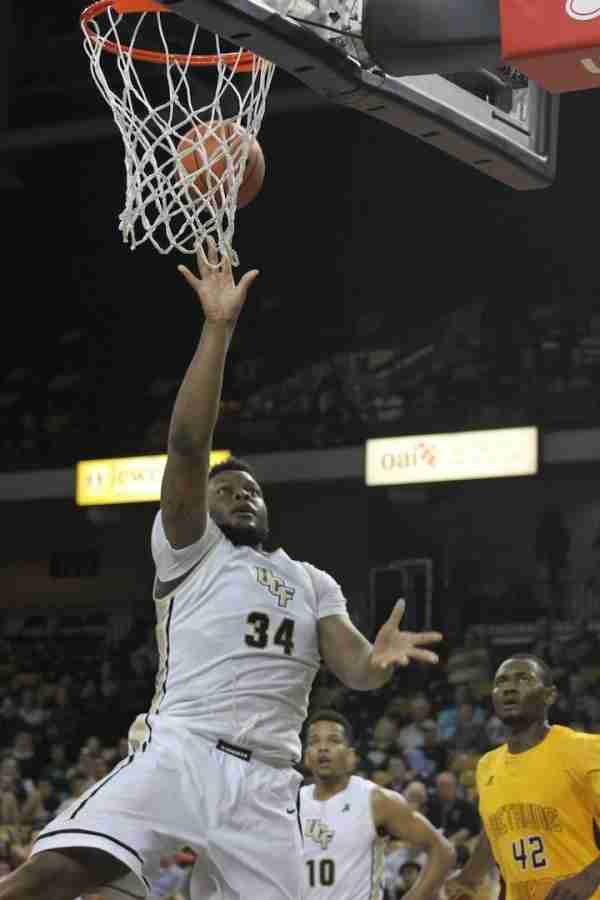 Justin McBride has led the Knights in scoring the past two games, including 14 points in UCF's 61-59 victory of Georgia Southern.

After going 5-1 at home to start the season, UCF mens basketball coach Donnie Jones is happy where his team is currently at, but knows the games will only start to get tougher, starting with their first road game Saturday at Florida State.

“Obviously you love winning, that’s always a good thing, and you love to learn through winning,” said Jones. “There’s a lot of things we’re still growing with, we’ve battled some injuries early on here and we’ve played some new faces, some young guys, some walk-ons…but I think we’ve made some big strides.”

The Knights success during the early part of the season has been a total team effort. Despite losing their top three scorers from a year ago, the Knights are still managing to lead the American Athletic Conference in field goal percentage (.498) and three-point field goal percentage (.371). Through six games, four different players have led the team in scoring. Eight players are averaging at least 6.5 points per game and no Knight is scoring more than 12.8 points per contest, something that Jones said can be a big advantage going forward.

“I think anytime you got guys that’ll step up to the challenge, and you got different guys each night, it’s always a plus,” said Jones. “Instead of it being one or two guys like it was the past couple of years.”

The Knights will travel to Tallahassee Saturday to take on their in-state rival Florida State Seminoles. UCF is 0-10 all time against the ‘Noles, including last years 80-68 loss at CFE Arena. This could be the year the Knights get their first win against FSU, as the Seminoles are currently just 3-4 to start the season, having lost to Northeastern, Providence, UMass and Nebraska. The ‘Noles, who were picked to finish eighth in the ACC after reaching the semifinals of NIT a year ago, have picked up wins over Manhattan, The Citadel and Charleston Southern.

“It’s always a challenge, playing an ACC team,” said Jones. “This team is very talented and obviously they’ve played some hard games early on, so they’ve had a hard schedule and I know going into anyones building it’s always hard.”

The game between the Knights and the Seminoles tips off at 2 p.m Saturday and can be watched live on ESPN3 and the WatchESPN app. Fans can also listen on AM 740 The Game, TuneIn.com and the TuneIn app with Marc Daniels calling the action.