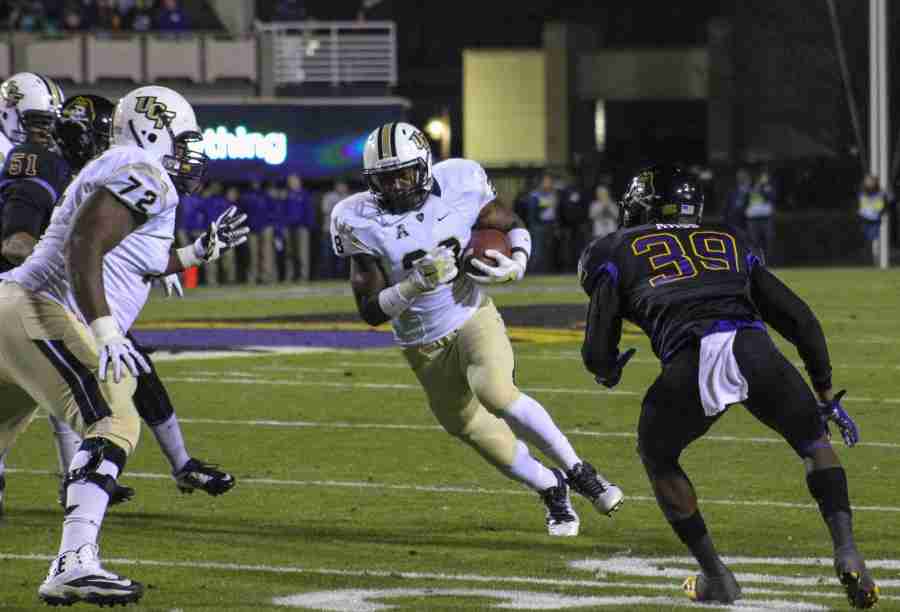 UCF's win over ECU gave the Knights their second consecutive AAC title, as well as their fourth championship overall.

GREENVILLE, N.C. — Justin Holman threw the ball 51 yards through the air before Breshad Perriman came down with the Hail Mary in the endzone to clinch UCF’s second consecutive American Athletic Conference championship on Thursday.

The Knights trailed the ECU Pirates by four with five seconds remaining in the game, before Holman’s heave found Perriman behind two ECU defenders in the end zone to give UCF the 32-30 win.

“I just put it up in the air and let my wide receivers make a play,” said Holman. “ That’s a blessing from above, somebody carried that ball because I thought it was short when it left my hand.

“It was surreal, it seems like everything is still moving in slow motion right now, still can’t believe it, but I’m pretty sure it’ll sink in in the next 24 hours or so tonight.”

Perriman finished the game with 139 yards on four receptions and the one big touchdown.

ECU was able to take a 30-26 lead with 2:17 remaining in regulation when Shane Carden hit Justin Hardy for a 13-yard touchdown pass, capping a run of 21 unanswered points by the Pirates. ECU would get the ball again with 1:47 remaining but opted to not go for the field goal on 4th and 19 and instead took a sack to kill more time off the clock.

This allowed UCF to get the ball at the ECU 35 with 10 seconds left in the game. Holman would throw a short sideline pass to Josh Reese to set up his 20th passing touchdown of the season and the game-winner.

Holman finished the game 20-33 for 274 yards and the touchdown, while Stanback had 107 yards rushing in his first game back since the Tulsa matchup.

“It’s nice that they gave the protection so he can throw it 70-yards like that and not high,” said UCF head coach George O’Leary following the game. “So it’s a big play, big game and it just feel great. Enjoy them because they don’t happen like this very often, they really don’t.”

UCF went into the second quarter tied at 6-6, but the Knights defense swung the momentum in their favor after Terrance Plummer intercepted Carden, setting UCF up with a 1st and 10 from the ECU 16-yard line. The Knights turned the interception into seven points when William Stanback rushed two-yards for a touchdown, putting UCF up 13-6 with 9:59 left in the first half.

The Knights scored 17 unanswered points following the Plummer interception, which was capped off by Stanback’s second touchdown run of the quarter to take a 23-6 before halftime. The Pirates cut the Knights lead to 23-9 just before halftime, when Warren Harvey hit his second field goal of the game just as time expired in the half.

ECU’s offensive line struggled to block UCF throughout the game, as the Knights recorded 10 tackles for loss against the Pirates. Hardy did have a standout game for ECU, as the FBS’ all-time leading receiver had 140 yards and a touchdown on 12 receptions for the night.

The Pirates did score 21 unanswered points to start the fourth quarter and take a lead, but the 10 second they left on the clock was enough for UCF to pull off their most exciting ending of the regular season.

“It’s just been surreal right now, I don’t understand what just happened, first time I’ve ever seen that in my life in person,” said Alexander of the final play. “It was just crazy ridiculous, I know the emotions going to run over us in the next couple of days or so.”

The win over ECU gives the Knights their second straight AAC title, which they will split with Memphis, and possibly Cincinnati depending on Saturday’s result.

“Second year in a row I think has a little more weight than just one,” said O’Leary. “So it works out well.”

UCF finished the season 9-3 and will be going to their third consecutive bowl game. This marks the first time in program history that the Knights have won back-to-back conference titles.

UCF will now return to Orlando where they will wait to find out their bowl fate on Selection Sunday. Currently the most logical option for the Knights is the Bitcoin St. Petersburg Bowl on Dec. 26, but that won’t be determined until Sunday night.