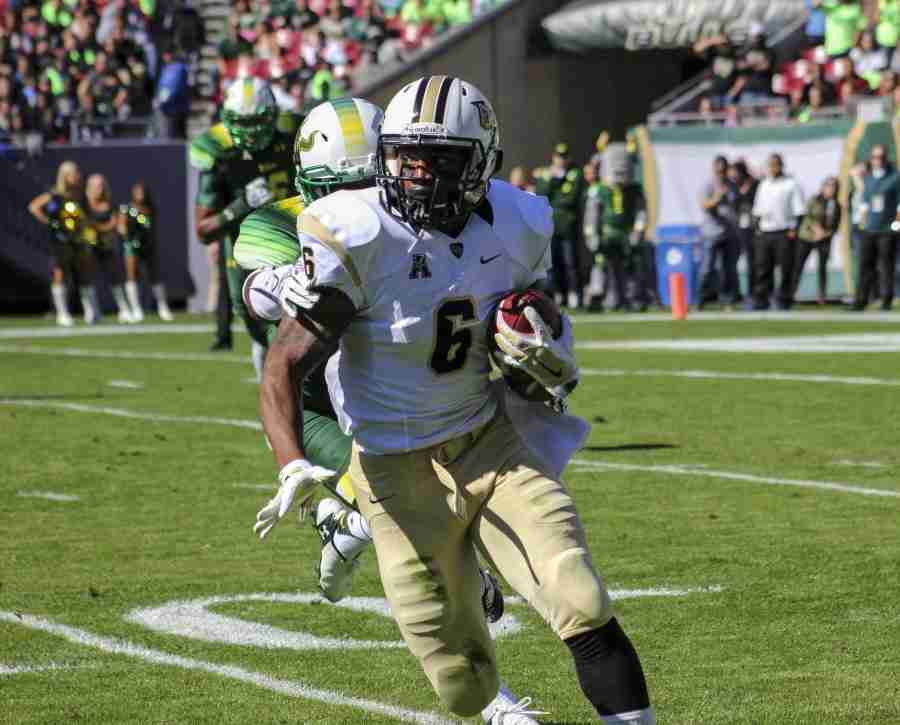 Rannell Hall rushed for 65 yards and had another 19 yards receiving in UCF's 16-0 win over USF.

UCF came out in the first half playing stellar defense while holding USF to only 90 yards during the first 30 minutes of the game.

UCF got on the scoreboard first early in the second when Justin Holman hit Breshad Perriman for a 7-yard touchdown, giving the Knights a 7-0 lead. The touchdown came after a rather uneventful first quarter which saw 111 yards put up between the two teams.

Holman finished the game going 20-29 passing with 150 yards and a touchdown, while Perriman had 55 yards on six catches to go along with his trip to the endzone.

Hall extended UCF’s lead to 14-0 when he rushed 21 yards for a score with 6:09 remaining in the first half. Hall got 10 carries at running back against USF, as the Knights were without backs William Stanback and Dontravious Wilson.

“That’s one of my greatest abilities is being able to run the ball after a catch,” said Hall. “So just putting me in the backfield I kind of went two and two together.”

USF had a chance to get some points before halftime but Marvin Kloss missed a 44-yard field goal off the post. After the missed field goal UCF ran out the final minute and a half of clock and took a 14-0 lead into the locker room.

The Knights was able to keep drives going during the first half, as UCF went 7-10 on third down, compared to USF’s 3-7. The Knights outgained the Bulls 164-90 during the opening half.

UCF extended their lead to 16-0 when Mike White was called for intentional grounding inside the 5-yard line, giving the Knights two points on a safety.

White went down with an apparent shoulder injury late in the third quarter and junior Steven Bench came in for the Bulls during the final 17 minutes of the game. Bench’s luck wasn’t any better, as USF produced no points with either quarterback under center.

USF would get a prime opportunity to score points late in the fourth when they had 1st and goal from the UCF 1-yard line, but the Bulls would turn the ball over on downs after being pushed back to the 22 following a penalty.

The shutout was the first by UCF in the rivalry, while also marking the Knights first-ever victory at Raymond James Stadium.

“I thought defensively we really came up; every time they had to ring the bell, they rung it,” said UCF head coach George O’Leary of the defense. “[We] did a great job of keeping them out of the end zone and we had a control.”

USF wide receiver Andre Davis was the lone bright spot for the Bulls, as the senior wideout had 57 yards on six catches in his final game in Green and Gold. Despite the shutout loss, USF still leads the all-time series against the Knights 4-2.

With the win UCF now improves to 8-3 and are one victory away from clinching at least a share of the American Athletic Conference Championship.

UCF did get devastating news during the week, as they found out senior wide receiver J.J. Worton will miss the remainder of the season due to an ACL injury. Worton led the Knights with 36 receptions through 10 games.

“We sustained it and we got a good win and now they gave themselves an opportunity to play for a conference championship next weekend,” said O’Leary following the game. “I congratulated them, but our job is not done yet and they understand that.”

The Knights will now prepare to take on East Carolina on Thursday in Greenville, N.C. for their final game of the regular season. If UCF can beat ECU they will claim at least a share of the AAC title for the second year in a row. Kickoff for Thursday is set for 7:30 p.m. with the game being televised on ESPN.