UCF struggles in second half, falls to Davidson Wildcats 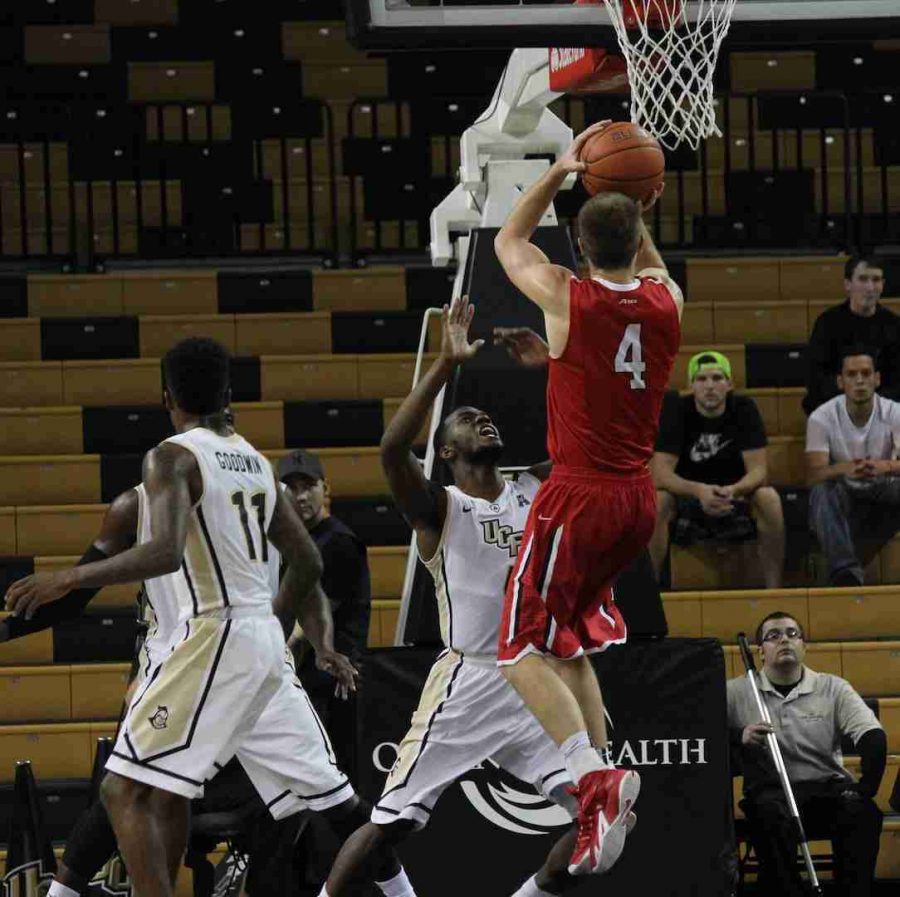 Tyler Kalinoski (No. 4) had 25 points for Davidson, as they gave UCF their first loss of the season.

Jack Gibbs was simply on fire scoring 37 points, while missing only two shots as the Davidson Wildcats defeated the UCF Knights 95-69 on Wednesday at the CFE Arena.

Gibbs career-high 37 points included five three-pointers. He was the first player to score 30 + points against UCF since Will Cummings did it for Temple on January 4th, 2014.

“They had a lot of guys getting rhythm, which opened it up for the point guard and it became one-on-one,” said UCF head coach Donnie Jones of Gibbs. “But he had it going and we tried some different things on him.”

UCF and Davidson went back-and-forth for the remainder of the opening half until the Wildcats went on a 14-4 run during the final 6:00, giving Davidson a 45-38 halftime lead.

“That’s why we schedule them,” said Jones of Davidson. “It ended up being for our young basketball team early on and give them credit for the victory.”

Gibbs led the way during the first half with his 22 points. Gibbs shot 9-10 from the floor during the opening 20 minutes, missing his only shot 11 seconds before halftime.

Davidson came out in the second half on a 35-17 run, jumping out to a 80-55 lead with 8:27 remaining in the game. The Wildcats would put it on cruise control from there on out on their way to the 95-69 victory.

“We just didn’t play with the energy and effort that we were playing with in the last week in practice,” said Daiquan Walker after the game. “And tonight was a result of it.”

Gibbs went 6-7 during the second half, as his team shot 9-19 from behind the three-point line during the final 20 minutes of play.

“Tonight we were kind of lackadaisical on defense,” said Kasey Wilson following the game. “As good of a player he is he can shoot the ball and that’s just always deadly.”

UCF was out rebounded by Davidson 42-26, as Wildcats Tyler Kalinoski had 25 points and eight rebounds for the game.

Walker was the Knights leading scorer with 15 points, while Adonys Henriquez had 14. Both players shot 6-14 from the floor as UCF finished the game shooting 45.9 percent.

The loss to Davidson is UCF’s first of the season, putting the Knights record at 3-1 on the season. UCF’s next game will be Sunday against Bethune-Cookman at 6 p.m. as the Knights will look to put the 26-point defeat behind them.

“Everyone of us is good enough to step up and do our part, so I think that’s what we’ve got to do and just play through those things because adversity hits and we can’t fold up,” said Wilson. “Tonight I wouldn’t say we folded up but we just weren’t there mentally and it showed.”

Other UCF basketball news that came out on Wednesday was that junior guard Matt Williams will miss the remainder of the season after having knee surgery. Williams played in one game earlier in the season, scoring four points in nine minutes in the season opener against Stetson.

Jones plans on redshirting Williams and still getting two years of eligibility out of him.