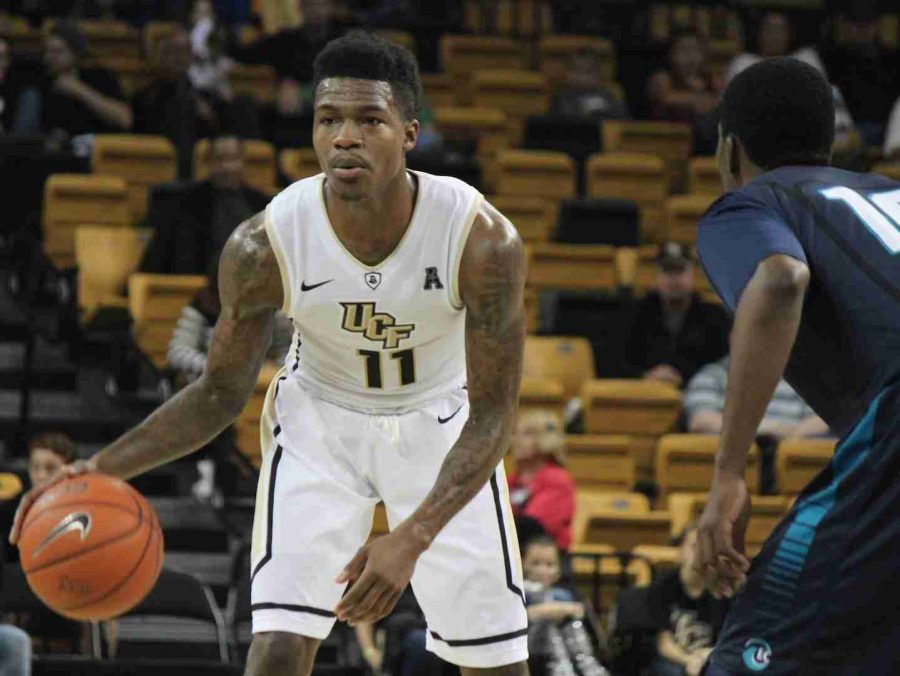 Adonys Henriquez had a game-high 21 points and six rebounds as the UCF Knights defeated the Eckerd College Tritons 76-59 on Thursday night at the CFE Arena.

UCF didn’t come out the gates strong against their only Division II opponent of the regular season, as the Knights trailed 37-35 at halftime.

Eckerd kept it close for the remainder of the opening half, responding to with small runs of their own anytime UCF would try and jump out with a lead.

Turnovers did the Knights in during the first half, as Eckerd turned 11 UCF turnovers into 10 points during the opening 20 minutes of the game. The Knights only turned the ball over three more times in second half.

“They were crucial, we got up 20-8 or whatever it was and I subbed three guys off the bench to come in and our energy just went straight to the ground,” said UCF head coach Donnie Jones of the first half turnovers. “We turned it over four times in a row right there for eight of those points, so that put them right back in the game.”

Henriquez was key for UCF in the second half, as he scored 13 of his 21 points during the final 20 minutes of the game.

“Adonys can really shoot the ball, he had the hot hand tonight so we had to try to find a way to get him the ball,” said Jones after the game. “I thought he did a good job with that and I was also proud he had six rebounds, because he needs to rebound the ball for us.”

With the win UCF now improves to 2-0 for the season, with four home games remaining before the Knights big test against Florida State on December 6.

Next up for UCF will be University of South Carolina Upstate, who will travel to CFE Arena on Sunday for a 6 p.m. tip-off against the Knights. This will mark UCF’s first-ever matchup against USC Upstate.

“We’re a little banged and bruised, we’ve got Matt WIlliams sitting out, he’s one of our better players, one of our better shooters and our leader, so we definitely want to get him healthy” said Henriquez about the progress of the team through two games. “We’ve definitely got to work on playing not to the level of our competition,

Sometimes you look at the jersey and say you see Eckerd, you say ‘okay lets just go out there and see what happens.’”