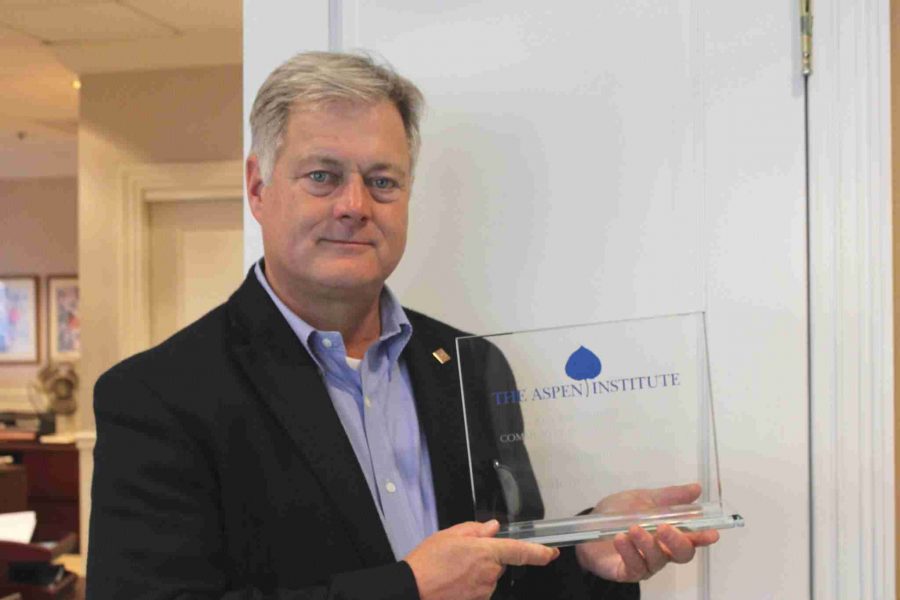 Valencia president, Dr. Sanford Shugart, holds the Aspen Prize Award for Community College Excellence, which was awarded by the Aspen Institute recognizing Valencia as the nation’s best community college in 2011.

Andrew Rossi’s latest documentary “Ivory Tower,” which world premiered at this year’s Sundance Film Festival and makes its global television premiere on CNN tonight, Nov. 20, at 9 p.m., takes a look at the question “Is college overrated?”

Throughout 90-minutes, the film tackles the spiraling rate of tuition prices and how student loan debt has passed the $1.2 trillion mark, which is more than the credit card debit according to the movie. Nothing that is relatively new to anyone who pays attention to the news. However, what the film does do is put a name and face to each of these problems, and points fingers at those they feel are responsible.

To help accomplish his goal of raising questions and awareness around the situation, Rossi profiles various students and professors from those of Ivy League school Harvard; historically black liberal arts college for women Spelman College; Arizona State, and more. Rossi states that institutions are taking advantage of students and selling them luxury, rather than an education — poking at “party schools” like Arizona State, where students get lost and forget that education is the most important thing of college.

In “Ivory Tower,” Rossi also spends a good amount of time displaying cheaper alternative higher education options like Deep Spring College, a two-year all-male school on a ranch that prepares students for “lives of service to humanity,” where 26 students balance classroom discussions with projects around the farm to help the community, and The Cooper Union, a science and arts institution that has been historically free.

While both are good choices of inexpensive education — both are very extreme examples since both  schools serve only a fraction of the population — Valencia president Dr. Sandy Shugart feels that the film missed one of the obvious situations, and that’s community college.

“For many students — just for the cost issue — [community colleges] is the best place for them to start,” says Shugart. “The community college movement has come of age.”

Despite a brief segment on Bunker Hill Community College, which is highlighted for their “flip classrooms,” the film ignores the importance and role of community colleges, whereas 45% of American undergraduates attend.

“One thing that I love about working in a two year college — a community college — is that we can offer a really inexpensive access to a very personal education. For a tuition that is less than half the meal plan at the neighboring university you can attend full-time here. What that means is that you’re saving those resources for your graduate professional education or other experiences you might want to have. I think that’s really valuable,” says Shugart.

In the video below, Dr. Shugart speaks out about many issues and questions raised in the film, offering a counterpoint to the ivory tower that exists in the media and elsewhere. He answers questions regarding if community colleges are the key to lowering student debt — ways to make higher education affordable — the future of higher education — misconceptions universities force with their price tags, and more.

Be sure to tune in to CNN tonight at 9 p.m. for the television premiere of Rossi’s “Ivory Tower,” and let us know what you think. Is college overrated? Tweet us your answers using the hashtag #valenciacollege. Let’s spark a conversation and work to get some of these problems resolved.