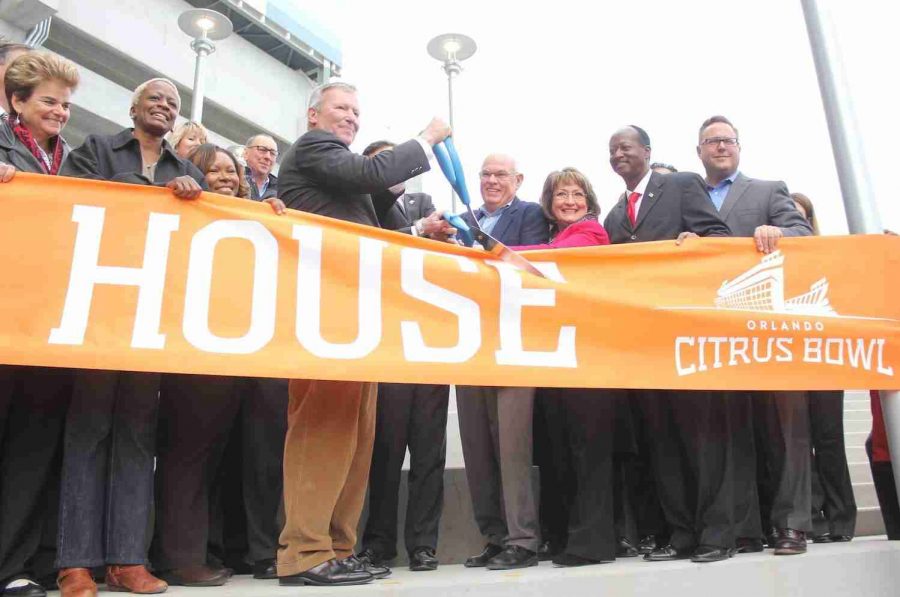 A new era in Central Florida sports started on Wednesday when the Citrus Bowl had its ribbon cutting ceremony and allowed the public inside for the first time since its demolition.

It took the Citrus Bowl 10 months from the demolition of the lower bowl to the moment all involved had been waiting for. Along with the ribbon coming ceremony came the official announcement of a College Football kickoff game featuring Florida State and Ole Miss in 2016.

“I think it’s a big deal because really there are three major players in the neutral site world for college football kickoff games, Dallas, Houston and Atlanta, ” said Hogan following the announcement. “So for Orlando to be the fourth leg on that table, to me was an important thing to get done,

“Having ESPN as a partner is going to be huge, so when you think about bowl games and now putting that into one of the slowest tourism months of the year in Orlando, this is an absolute home run.”

Hogan is already anticipating a sell out for the 2016 Labor Day game and hopes to have news on the 2017 and 2018 participants soon. Ideally Hogan hopes to have a Florida team playing in the kickoff games, but they will not be conference affiliated.

The Citrus Bowl renovation means a lot of things for sports in Central Florida, especially football, with a kickoff game being planned with ESPN for 2017 and 2018 already. With the addition of the Cure Bowl next year, the Citrus Bowl will feature five different premier games, if you include the Florida Classic.

“It’s a game changer, if you think about the new Amway Center, we’ve got the new soccer stadium coming into play and the Citrus Bowl,” said Central Florida Sports Commission president & CEO John Bisignano. “When you’re a rights holder the first thing you look at in a destination to bring an event is the venue and we have a state of the art facility.

“We can bring and attract world class events, just as was announced today with the Ole Miss, Florida State game coming in 2016.”

Bowl season will be big this year for the Citrus Bowl as they will start with the Russell Athletic Bowl on December 29th and then cap off the bowl season in Orlando with the Buffalo Wild Wings Citrus Bowl on January 1.

Ideas for other potential college football games are already formulating in the heads of Florida Citrus Sports including a potential return home for the UCF Knights’ football team, which the Knights called home from 1979 until 2006. But ultimately the decision for a UCF game at the Citrus Bowl lies with the Athletics Department.

“I think in the future it would be nice to feature UCF back here home and make a big, big, big deal out of it community wide,” said Hogan about the idea. “At least once every few years have the Knights back here and put a focus on it.

“We certainly would like to continue to have a relationship and put a focus on the Knights for our community.”

High School football playoffs will also be returning to the Citrus Bowl, with state championship games starting in early December.

The Citrus Bowl has been home to many different teams sports franchises over the years, from UCF to multiple professional football teams such as the Orlando Rage, as well as games of the 1994 Fifa World Cup. So for 2015 it seems only fitting that Orlando City SC will call the Citrus Bowl home for their inaugural season in the MLS.

“Before you know it we’ll be playing in here, which I’m excited about, the teams excited about, the fans are excited to be back here,” said Orlando City SC president Phil Rawlins at the ribbon cutting. “The championship game is the last game we played here and I’ve been on several tours while it was under construction and I’ve had the benefit of seeing it a few times, it’s a magnificent stadium.”

The Florida Blue Florida Classic between Florida A&M and Bethune-Cookman will be the first official game played in the newly renovated Citrus Bowl. The game will be televised on ESPN Classic with kickoff scheduled for 2 p.m.

Construction will continue on the Citrus Bowl following the Florida Classic, and will continue into 2015. The 100 percent finished product is scheduled to be done after the bowl games.