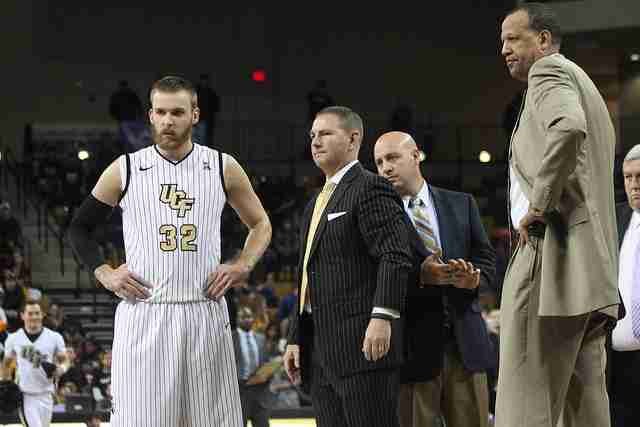 Senior Kasey Wilson is one of seven returning players for the Knights, and one of only two seniors on the team.

The UCF Knights men’s basketball team will have the task of replacing three integral players from last year’s team in Isaiah Sykes, Tristan Spurlock and Calvin Newell. However, when UCF takes the floor for their first exhibition game on Tuesday against Flagler, head coach Donnie Jones knows with a new season comes renewed excitement and expectations.

“It’s my fifth year, but it is a new era,” Jones said. “We’re in a new league and this is pretty much a new team, so there are new challenges. Anytime you see teams go to a new league, they’re trying to figure out how to fit into the conference. I’m excited with the kids we’ve got and where we’re headed.”

After eight years in Conference USA, UCF spent its first season in the American Athletic Conference (AAC) in 2013-14. Three members of C-USA (Houston, Memphis, SMU) also joined UCF in the first year of The American, and three others will switch from C-USA to The American for the 2014-15 season (Tulane, Tulsa, East Carolina). Leaving the American after one season will be Louisville (ACC) and Rutgers (Big 10).

UCF will return seven players from last year’s squad and signed a pair of celebrated Orlando natives. The Knights bring back two players – Kasey Wilson (22 starts) and Staphon Blair (18 starts), who spent most of last year in the starting lineup.

“I think our strength is our unity,” said forward Kasey Wilson, one of just two seniors on the roster. “This is probably the closest team I’ve ever been on. We’re really close — now.”

“This could be a team with no stars,” Donnie Jones added. “It’s just a very good team and that’s our goal.”

A couple of local talents, Adonys Henriquez and B.J. Taylor, will also take the court this season for the Knights. Henriquez, a 6 foot 6 guard out of Orlando Christian Prep, was named Florida Class 2A Player of the Year while leading them to a state title. Taylor was the runner-up for Florida’s Mr. Basketball Award after earning Florida Class 8A Player of the Year honors while averaging a state-best 34.5 points per game last year at Boone High School.

“I want to stay here in Orlando and do something special right here,” said Taylor.

“I think the guys coming in are obvious next-level players,” Donnie Jones added. “One of the most talented groups we’ve probably signed here.”

The AAC is one of the toughest conferences in the country, led by the defending National Champion UCONN Huskies, as well as perennial powerhouses Memphis, Cincinnati and an upcoming SMU program.

“The main goal is to win the AAC Championship,” Kasey Wilson said. “If you do that you get to the [NCAA] Tournament and that has been our goal for the longest time. That’s what we’re trying to do, but we know we have to take it one game at a time and that we are in a tough conference.”

The game against Flagler will tip off at 7 p.m. at CFE Arena, and will be free to the public. The Knights will play their first eight games – including exhibitions – at CFE Arena and 10 of their first 12. UCF opens up the regular season on Sunday. Nov. 16 against Stetson.