UCF stays perfect in conference with win over Temple 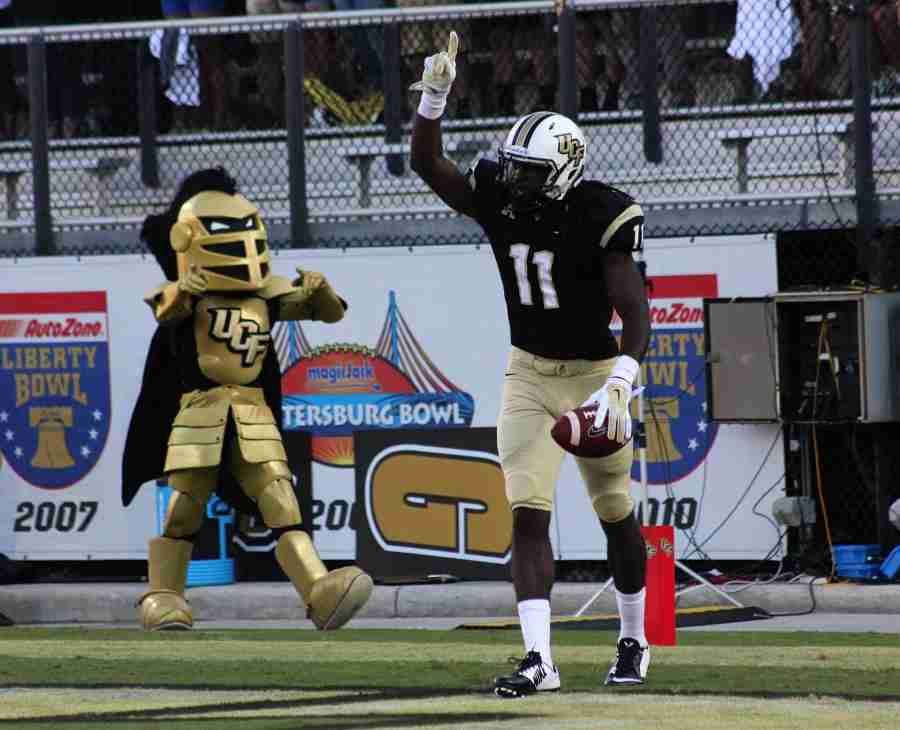 Breshad Perriman had a career-high 146 yards receiving in UCF's win over Temple.

Justin Holman threw for a career-high 336 yards and two touchdowns as the UCF Knights defeated the Temple Owls 34-14 on Saturday during the Knights’ homecoming game.

Holman had a career game against the Owls, as he topped his previous career-high in passing yards, which he set against BYU, while also tying his career-high in touchdowns. This comes only a week after Holman was briefly benched in favor of Nick Patti in the second quarter against Tulane.

UCF opened up the game by jumping out to a 17-0 lead during the first quarter, all while holding Temple to 55 yards of total offense during the opening 15 minutes.

“Offensively and defensively we put together the best game so far this year working as a team,” said UCF head coach George O’Leary following the game. “I thought they were very productive on defense and the offense was productive at making plays when they had to.”

Temple got in the end zone early in the second quarter when P.J. Walker hit Romand Deloatch for a touchdown, cutting UCF’s lead to 17-7, but that was all the Owls’ offense would muster up as their next points would come on special teams after a blocked punt was returned six yards for a touchdown.

A 10-point game was the closest Temple would make it all night long, as the Knights defense would go on to hold the Owls to 182 yards of total offense for the game, while also forcing four turnovers.

“I thought the defense really bowed up,” said UCF head coach George O’Leary after the game. “I thought they did a nice job keeping them out of the end zone.”

Holman looked to be improving his timing with his receiver throughout the game, as he hit Breshad Perriman in stride for a 54-yard touchdown during the second quarter. The 54-yard scoring play was Perriman’s fourth touchdown catch of the season, all of which came from 45 yards or more.

“We work on that a lot,” said Perriman. “We run those deep plays a lot in practice and it pays off in the game”

Perriman’s 146 yards receiving were a new career-high for the junior wide out.

Running back William Stanback added two touchdowns on the ground for UCF, including a 2-yard score in the third quarter that put the Knights up 34-14. Stanback finished the game with 100 yards rushing, giving him his first 100 yard game since Bethune-Cookman back on September 20.

Holman finished the game having completed 25-39 passes, while hitting seven different receivers. J.J. Worton had 42 yards on four catches, while Rannell Hall had 76 on five catches and Josh Reese had 56 yards of his own on another five catches.

“It helps me a lot because those guys can get open, It’s not the case where I just have one primetime receiver” said Holman of his receiving corp. “I have about five or six guys that can all come in and do the job and that helps me out a lot because I know I have a lot of weapons and they can take a small play and turn it into a big play.”

With the win UCF improves to 5-2, while staying a perfect 3-0 in American Athletic Conference play. The Knights have yet to lose a football game in the AAC, going 10-0 since the league’s inaugural season in 2013.

UCF will now travel to Connecticut to face conference foe UConn on Saturday, Nov. 1. Kickoff is scheduled for noon, with the game being televised on CBS Sports Network.