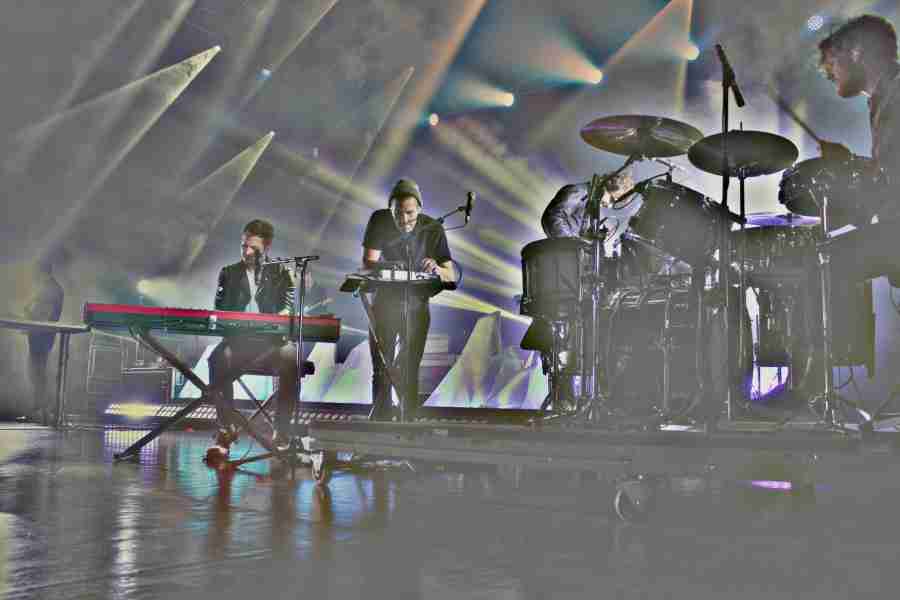 It’s almost as if people forget they have their own smartphones handy when they are out drinking, and need to know the answer to something right at their fingertips. That or they are just extremely selfish and would rather someone else use up their data package and kill their battery life to benefit their behalf.

“Do you know the score of the Florida State and Notre Dame game?” asked a mother in the crowd, who had drove her son five hours to catch American rock band Foster the People perform at the Hard Rock Live Saturday night.

Lead by singer and multi-instrumentalist Mark Foster, the indie-rock group took the stage a little after quarter past 10, at night. To the right of him was bassist Jacob Fink; to the left drummer Mark Pontius; and behind them a string of touring musicians ー all multi-instrumentalists like the the founding members.

Welcomed by an array of blue and white lights, the group started their set off with “Psuedologia Fantastica,” a song off of their new album “Supermodel,” and continued to play a mix of new and old songs from it and their debut album “Torches.”

Much like for the opening act, French singer Soko ー who had played her first Orlando show earlier in the week at the Peacock Room ー Foster and the People kept the crowd dancing their entire set. Speaking to the crowd prior to every song, Soko’s 45-minute set consisted of a mixture of high energy tracks from her debut album “I Thought I Was An Alien” – encouraging everyone to “dance like an alien on acid for the next three-minutes” to the albums title track. Soko and her band would also take the time to perform singles from her next project. Soko’s music is very raw and dark if you put the electronic bass packed beats and her witty unconventional stage persona to the side and focus mainly on the lyrics. A good example of this came during the French singer’s closing song “We Might Be Dead Tomorrow,” in which her bass player played the cello on.

Foster the People would keep the dance party. During songs “Houdini” and “Call it What You Want” a lady in the balcony section was dancing so hard that it was nearly impossible to remove your eyes from her because you feared that she would fall at any time.

The indie-rock group hides sad themes through their up-tempo rhythms. Take “Miss You”: a song about loving someone who doesn’t want to be loved, yet is still very dance oriented.

Prior to getting into their two-song encore: “Best Friend” and ” The Truth, in which touring member Isom Innis played in a wizard robe from Harry Potter World in Universal Orlando; the group would finish their main set off with “Pumped Up Kicks,” a song that help them get into the spotlight originally, and “Don’t Stop.”

After seeing the group perform for the second time this year; their 80 minute, 15-song  set  proved that they are everything but one-hit wonders. Will any of their new songs have the same crossover success as “Pumped Up Kicks”? Probably not, but Foster seems to have has different plans with new projects. Plans that allow him to help other people grow, as he grows himself. Plans that will encourage people to “be a role model for the right reasons.”

Ty is a college student at Valencia College studying Journalism and Digital Media. Follow him on Twitter @Tru2Ty