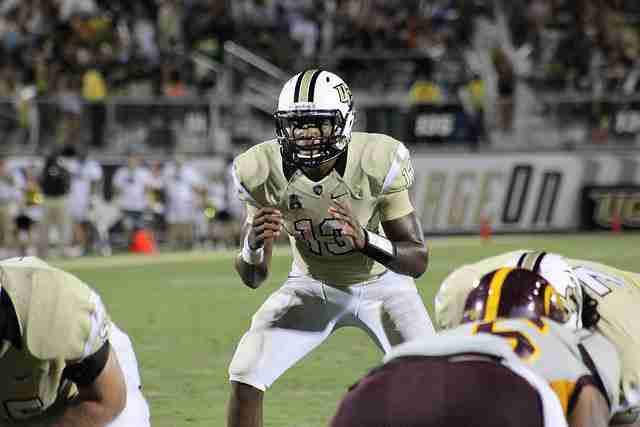 Justin Holman will be making the first conference start of his career.

The UCF Knights kick off conference play this week, as they travel to Houston to take on the Cougars Thursday on ESPN.

“Obviously, it’s a great night or the NFL wouldn’t have done it,” said UCF head coach George O’Leary about playing on Thursday night. “You’re on national TV and I think a lot of people are still college-bound on Thursday night. The players look at it as the only game on TV college-wise.”

Houston (2-2) is coming off a 47-14 victory against the University of Nevada Las Vegas (UNVL) last week, and will also be playing their first conference game this season. The Knights defeated the Cougars 19-14 last season, a game that came that came down to the final plays.

Houston was first-and-goal going for the go-ahead score, until the Knight defense stood its ground with less than a minute left. On fourth down, Brandon Alexander broke up the final pass in the end zone. Four of the five games in the series have been decided by seven points or less.

“Every team in the American Conference is a rival to me, that’s how I treat them,” said O’Leary. “We have one goal on our team and that’s to win a conference championship, so every game is critical,” added O’Leary. “You always want to control your own destiny as far as the conference is concerned.”

Prior to last weeks off week, UCF (1-2) picked up their first win of the season against Bethune-Cookman (B-CU) 41-7.  UCF has won four straight conference openers, and will look to defend their AAC title after going undefeated in conference play last season.

“Going into our first conference game, ultimately our goal for the year is to just win conference, so this game definitely sets the tone,” said senior linebacker Troy Gray. “It was a close game last year, so we’re definitely excited for the opportunity. First game in conference, time to go win.

Traditionally an offensive powerhouse, the Cougars’ ‘Third Ward Defense’ has caught up with the teams high powered offense. After leading the nation in 2013 with a +25 turnover margin and 43 turnovers gained, Houston now ranks second nationally with 13 turnovers forced through four games.

“Where they are playing really well now is on defense, said O’Leary. “They’re causing a lot of turnovers, so going into the game ball security is critical.”

Justin Holman and the Knight offense will have their hands full with a defense that has forced multiple turnovers in 23 of their last 25 games and has a turnover in 27 straight games.

The Knights offense has been progressing from game one this year. UCF opened 2014 with 246 yards of total offense vs. Penn State, followed by 299 yards at Missouri and 351 total yards against B-CU. The ground game has improved each week as well, posting numbers of 24, 90 and 169.

The Knights will be without wide receiver Ranell Hall for the first half this week after he was ejected from the last game following a targeting penalty.

“Thank God he’s at a position where we have some people, we have some depth at, but it’s the next guy up to bat.”

Kickoff is set for 7 p.m ET at Houston and will air on ESPN.