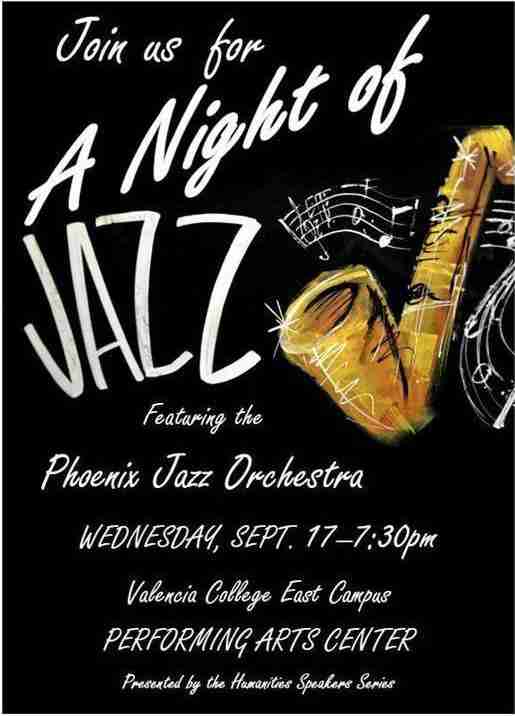 Join Valencia College for “A Night of Jazz” hosted by The Humanities Speakers Series this Wednesday at the East Campus Performing Arts Center.

The event will feature The Phoenix Jazz Orchestra, a 20-piece Big Band, “An orchestra of the future, not a band of the past.”

The Phoenix Jazz Orchestra (PJO) has it’s foundations in The Jazz Project, under the direction of pianist Don Scaletta. While the music of Stan Kenton will remain a staple element of the PJO performances, the ensemble has expanded their repertoire, adding arrangements performed by the big bands of Buddy Rich, Doc Severinsen, Woody Herman, Maynard Ferguson, Thad Jones & Mel Lewis, Count Basie, and Duke Ellington, and still expanding.

PJO is proud to perform these most influential pieces that have forever changed the world of big band jazz.

The performers will be discussing and speaking on the great musicians of the past and their works in this performance.

The event is free and open to the public and will start at 7:30 p.m. on Wednesday, September 17th at the East Campus Performing Arts Center, 701 N Econlockhatchee Trail, Orlando, FL 32825.