Running back vital for UCF in 2014 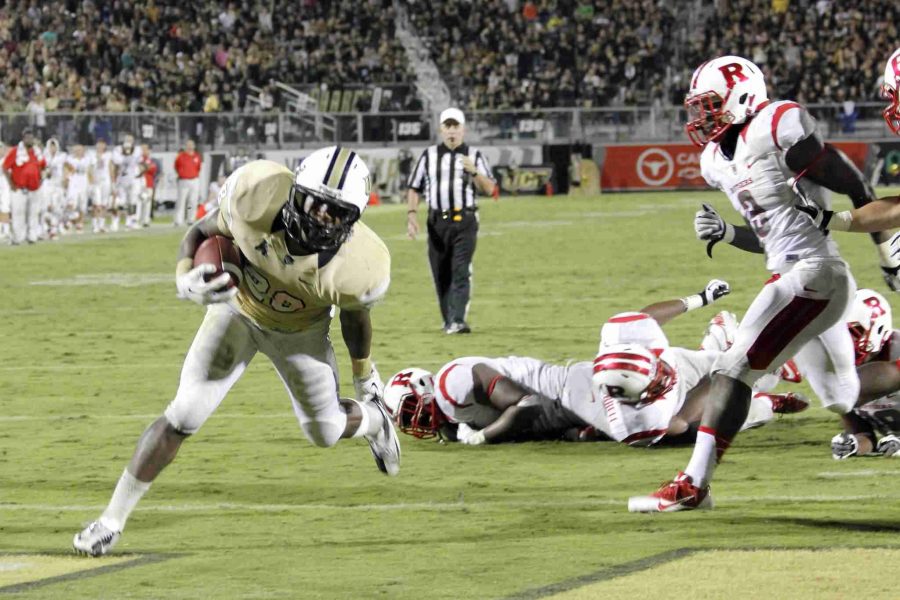 William Stanback will be the feature back for the Knights this year after the departure of Storm Johnson to the NFL.

Going into the 2014 season, the UCF Knights football team will look to retool an offense that saw leading passer Blake Bortles and leading rusher Storm Johnson both drafted into the NFL. The Knights will rely on a committee of skilled players to continue the programs winning ways, perhaps none more than sophomore running back William Stanback.

“When you look at this football team, Stanback stands out, there’s no question about it,” said head coach George O’Leary. “I think William runs with power and speed, he has a great passion for the game, and he’s always trying to learn. I want him to be the back that can carry it 30 times a game if we ask him to do that,” added O’Leary.

With a new, young quarterback under center, whoever it may be, Stanback and the other running backs will most likely be the focal point of this Knight offense early on the season.

After O’Leary was critical of Stanback during the spring, he had nothing but praise for the New York native’s work ethic and increased size and speed over the summer.

“I think after the Fiesta Bowl everybody was praising him, and I told him you’re only as good as your last game,” said O’Leary. “I just expected more from him, I wasn’t going to anoint him the position, I never do that, I always want competition.”

Stanback heard the wake up call loud and clear and was appreciative of the honesty from his head coach for telling him what he needed to hear.

“I felt I needed to do things better, I felt I wasn’t running as hard as I should have been and overall I wasn’t in the right spot, and I am now,” said Stanback.

Stanback’s goals are not only to help this football team succeed this season, but to emulate and hopefully surpass the successes of former Knight running backs. Additional to the physical conditioning over the summer, Stanback made it a point to go through the archives to study tape of what made these backs stand out, especially former All-American Kevin Smith.

“I was watching him (Smith), Latavius Murray, everybody that was here before me,” said Stanback. “The way he (Smith) finds the holes as soon as it opens up, he just gets right through it, and I feel like I need to be like that.”

Stanback’s roommates and fellow sophomores Dontravious Wilson and Micah Reed will also look to carry the load in the backfield. The other element to a smooth quarterback transition will be a veteran receiving core that returns it’s top three yards leaders from last season.

Seniors J.J. Worton and Ranell Hall will look to lead a talented crop of wideouts that coach O’Leary feels is a strong point of this offense.

“We’re going to still be in tact with the running game, but we got good receivers back obviously,” said O’Leary. “I look at eight receivers that have a shot at helping us this year.”

O’Leary went on to say- “I think they’re a mature group, they have to understand that not every ball is going to be perfect. The big thing is the y.a.c. (yards after catch) after the play. They have the ability to do that, which I think is big. Right now the quarterback just has to get the ball to them as quick as they can because I think they have the ability to make them miss.”

Two under the radar players to look out for in the wide receiver group are senior transfer Jackie Williams, who sat out last year after transferring from U.A.B (University of Alabama Birmingham), and 22 year old freshman Jordan Akins, who spent the last four years playing minor league baseball.

“I believe I’ll be able to come in and contribute immediately because I’m not a freshman,” said Williams. “I’m a kid that’s played at the college level and I’m just trying to learn the new system, and learn the ins and outs of the way they do things down here.”

“The kid that’s really impressed me out there is this Jordan Akins,” said O’Leary. “He’s a new kid that we signed four years ago as a wide receiver out of Georgia, but he went to baseball. He is a kid that can be the surprise player of the year on this team…he’s a great kid, very mature and he’s done everything we’ve asked of him so far.”

With the kickoff in Ireland against Penn State now less than a month away, the question still on everyone’s mind will undoubtedly be who will be taking that first snap under center.

“It’s going to shake itself out,” said O’Leary. “They’ve all had their good times and bad times, but we’re going to put the person out there that gives us the best chance to win.”