UCF still without a starting quarterback going into preseason 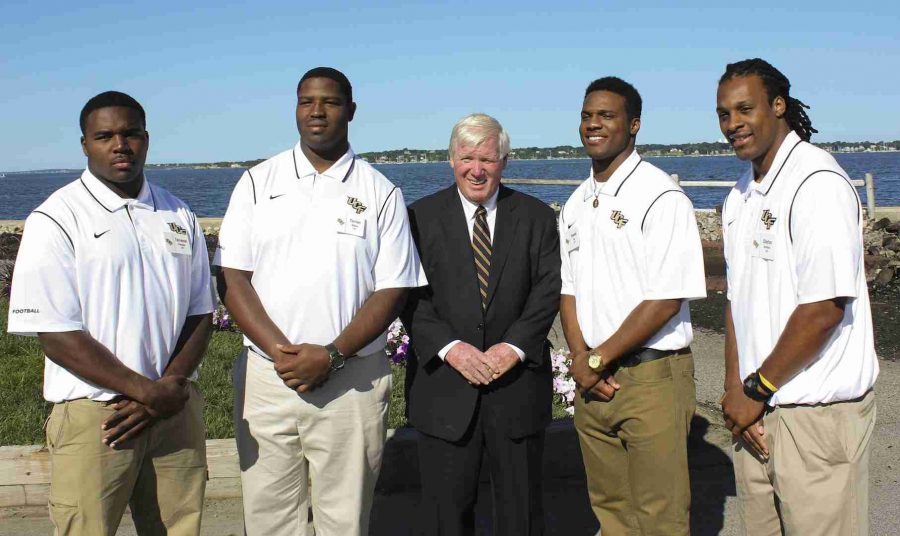 NEWPORT, R.I. — The defending American Athletic Conference champion UCF Knights open up the season in a month when they take on Penn State on Saturday, August 30 at Croke Park in Ireland, but for now the No. 1 question on everyone’s mind is who will replace Blake Bortles at quarterback.

UCF head coach George O’Leary didn’t name a starting quarterback following the Spring Game back in April and when asked at AAC media day in Newport, Rhode Island about who will be the starting signal caller to start the season O’Leary was again mum.

“We have four quarterbacks,” said O’Leary about the competition. “I’ll have one within the first couple of weeks of practice and then we’ll move on.

“Again, we have four young players and I want to get more of an opportunity of to see what they can do and move the chains.”

O’Leary did say that he will have a starting quarterback named before the team leaves for Ireland the week before the game.

Out of the four quarterbacks UCF has on the roster only one of them, Justin Holman, has seen playing time with the Knights, and while Boise State transfer Nick Patti has seen action for the Broncos in the past, both Pete DiNovo and freshman Tyler Harris have yet to play an official snap.

Quarterback seems to be the only position left on the Knights roster that hasn’t been full figured out on the depth chart yet, as the team returns four wide receivers who recorded a catch last season and all but two starters from last year’s defense.

“If you look at offense the receiving core is back intact,” said O’Leary. “Seven of the eight are back from last year and Jackie Williams, who as an official receiver at UAB is now one of those eight guys, so I think it’s almost a match for Jeff (Godfrey) leaving.

“That’s a very strong group that has a chance to be very productive.” added O’Leary.

It’s also worth noting that UCF will play five weekday games this season, including three Thursday night games and two on Friday nights, but the players aren’t too worried about the increased amount of short weeks this upcoming season.

“Practice days are shortened up,” said wide receiver Rannell Hall about the short weeks. “It’s not too much of a difference, just a day shorter.”

The Knights will be traveling to Tampa this season for their second “War On I-4” rivalry game against cross-state USF since the two teams joined the same conference last season. UCF and USF are set to meet on Friday, November 28th at Raymond James Stadium, for the Knights second to last game of the regular season.

“I think it’s a great game just because of the distance factor,” said O’Leary about the rivalry. “I think it’s great in college football that you can have that kind of game.

“Every conference has one of those games, Georgia Tech/Georgia was a big game, Alabama/Auburn, they all have them. I think it keeps the fan base going.”

Whomever UCF chooses to go with at quarterback to start the season, they won’t have an easy challenge ahead of them as the Knights open up the season in Dublin, Ireland against Penn State, before returning stateside for a September 13, matchup against Missouri in Columbia.