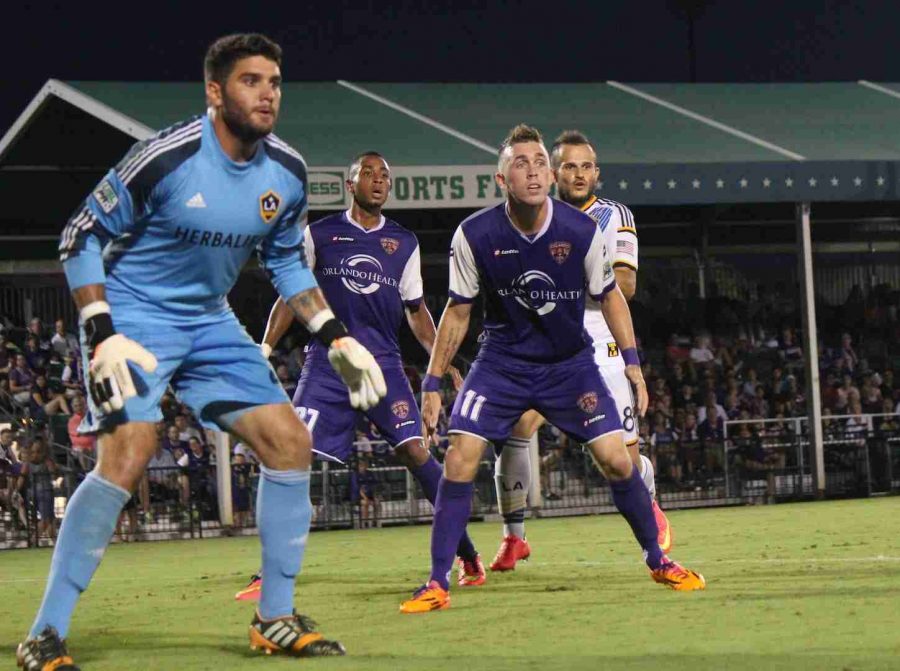 Corey Hertzog scored two goals and had another two disallowed due to offside, as Orlando City SC defeated L.A. Galaxy II 3-0 on Saturday night in front of an announced attendance of 5,029 at the ESPN Wide World of Sports Complex.

The two disallowed goals prevented Hertzog from notching his first hat-trick of the season, but the 23-year old forward doesn’t mind getting the brace as long as his team gets the win.

“As long as we win though it’s fine,” said Hertzog about his near hat-trick. “As a forward you always want a hat-trick and all that, but it’ll come.”

Hertzog got Orlando City on the scoreboard first, when he put a Luke Boden cross into the back of the net in the 18th minute to give the Lions a 1-0 lead.

He would go on to score another goal in the 43rd minute following a well played ball from Kevin Molino, which allowed him to beat the offside trap. Orlando City went into the locker room at half leading L.A. 2-0, while outshooting them 7-5.

Molino scored a goal of his own in the 61st minute, when he followed up a Cobi Span shot that went off the crossbar and landed at his feet for the easy finish. Molino currently has 11 goals for the season, putting him only four behind Dom Dwyer’s record of 15 from last season.

“We said coming out at halftime, ‘next goals the most important,’” said Hertzog about the Lions third goal. “That’s what we wanted, and we finally got it and that’s when L.A. just couldn’t come back anymore.”

The Trinidadian midfielder will have another 12 league games to be able to tie or break the former Orlando City forward’s record.

With the win over L.A., Orlando City improve their record to 13-0-3 for the season, as the Lions currently sit 11 points ahead of the second place Richmond Kickers, with 42 points.

“We’ve been a work in progress and that is getting better,” said Orlando City head coach Adrian Heath after the game. “Lots of our combination play in the middle part of the field is getting a lot, lot better.”

The Lions are currently on a seven-game winning streak, and have yet to lose a regular season game this year.

“The run’s very good, but that’s what I expect,” said Heath after the game. “I think we’re good enough to have those type of runs, so that doesn’t surprise me, we’ve got to keep it going now.”

Orlando City will next travel to Wilmington, North Carolina, where they will face the Hammerheads on Thursday, July 3, before returning to Florida for the second leg of the I-4 Derby on Sunday, July 6th against the Tampa Bay Rowdies.