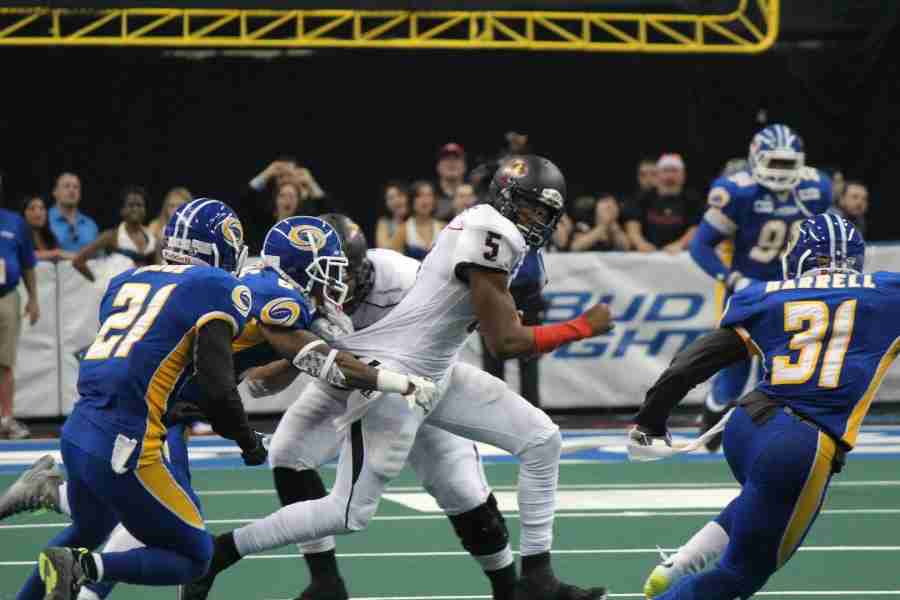 Bernard Morris threw for four touchdowns, but also had three interceptions and a fumble in the loss to the Storm.

Bernard Morris threw three interceptions as the Orlando Predators fell to the Tampa Bay Storm 35-34 at the Tampa Bay Times Forum, as their record fell to a 8-7 record, tying them with Tampa Bay for the top spot in the South Division.

The first touchdown by the Predators was followed by a missed extra point attempt that would leave them trailing by one point throughout the game.

After trading touchdowns back and forth until the half, the Predators headed into the locker rooms up 27-21 but returned in the third to not score a single point until seven minutes into the fourth quarter.

“We didn’t execute, we performed poorly in the second half. I don’t know if we did anything in the third quarter to even resemble a victory,” said head coach Rob Keefe about the loss against Tampa, “Poor execution is the key word, and we still lost by a point but at the end of the day we gotta win those games to be good.”

Having a lackluster performance at the game was starting quarterback Bernard Morris who completed 18-28 passes for 194 yards, four touchdowns, and three interceptions that would end up costing the game.

“He knows that he can’t perform that way for us to win the division let alone win football games, we’ll correct those mistakes,” said Keefe about Morris’ performance tonight, “but hes gotta learn from this one and let it burn over a bye week, which will be a very, very long week for the Orlando Predators.”

The Predators will now get two weeks to rest before returning to the gridiron on July 7 in Iowa where they will face the Barnstormers. It can be viewed on ESPN 2.