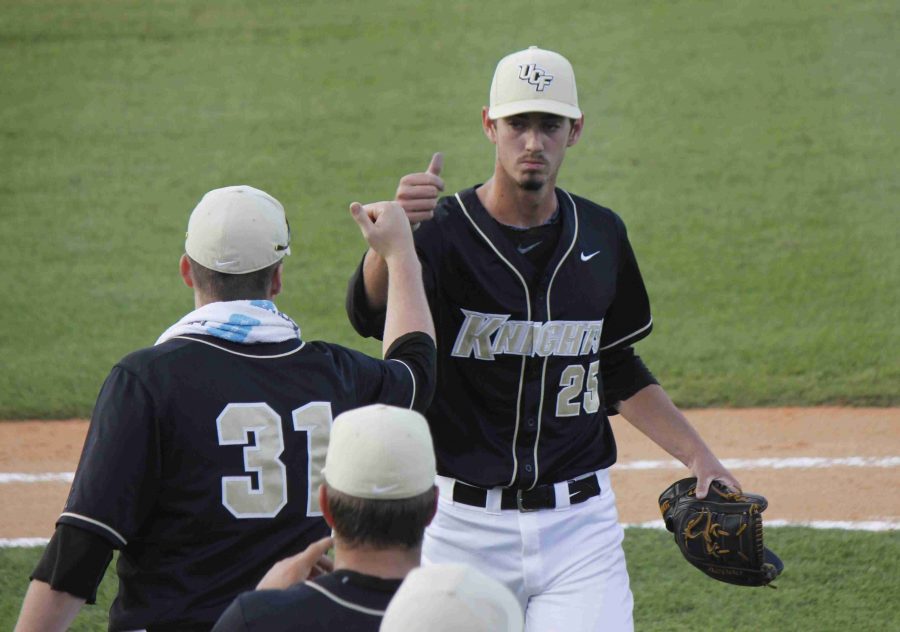 Eric Skoglund has been the Knights ace pitcher throughout the 2014 season.

With four games remaining in the regular season, the UCF baseball team is in a great position to make the NCAA tournament.

After winning two out of three games against Presbyterian College over the weekend, the Knights travel to Tallahassee to face Florida State on Tuesday and wrap up the season this weekend with a three-game series against Connecticut.

“Everything that we want to accomplish is still in front of us and we just need to play at a certain confidence and energy level,” said head coach Terry Rooney. “Your confidence is dictated by your preparation.”

The Knights can enter the NCAA tournament by either winning the American Athletic Conference championship or by receiving an at-large bid. The AAC championship takes place May 21-25 in Clearwater, Fla.

“I think we’re still in a position to compete for an at-large bid in the NCAA regionals,” said Rooney. “The big positive of this is we’re going down to the last week of the regular season and we have an opportunity to win a championship and an opportunity in my mind to solidify ourselves as an at-large bid team.”

The Knights’ April 30 game against North Florida was canceled due to rain, which allowed the team to add a game against fourth-ranked Florida State.

The game against the Seminoles will enhance the Knights’ RPI ranking, which will help the team’s chances of securing an at-large bid if they can’t win the American championship.

“Florida State is a great team, a great program,” said Rooney. “I like challenging our guys late in the season. The opportunity to go to Florida State, that’s good for our program and good for our team. Where we are in the bigger picture, it certainly could be a beneficial trip up there, but we need to play well.”

The Knights know that their success will hinge largely on their pitching. Rooney said the starting pitchers are going to be critical down the stretch.

“From a pitching standpoint, there are a lot of challenges,” said Rooney. “One thing we’ve got to do is get some quality innings and more innings out of our starting rotation. The game within the game is [Eric] Skoglund [pitches] seven to nine innings every week. If Skoglund wasn’t going seven to nine it’s even more on [the bullpen].”