Predators stay atop their division, defeat Voodoo at home 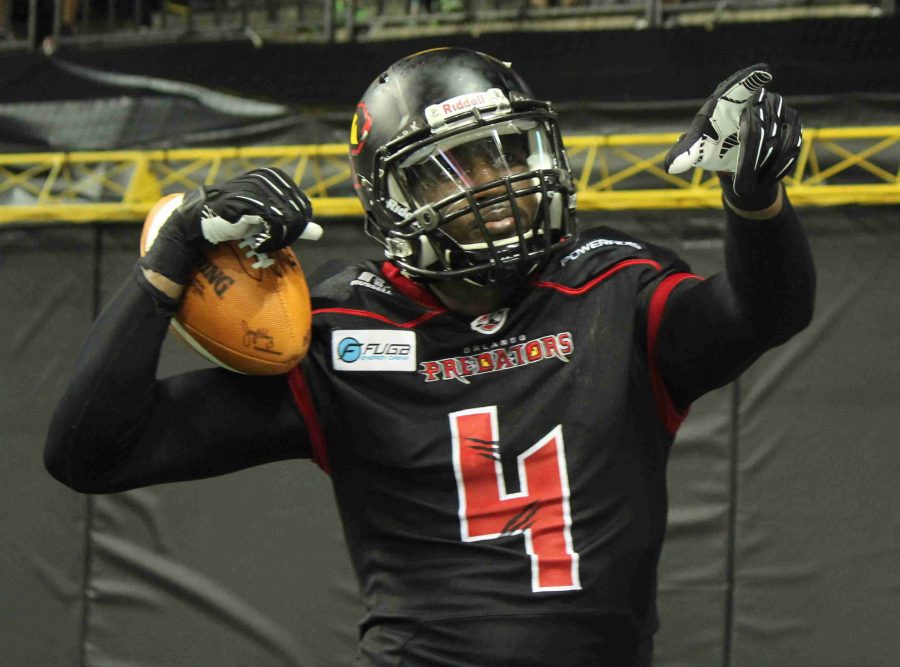 Greg Carr caught four touchdowns and ran in another, all while helping the Orlando Predators defeat the New Orleans Voodoo 63-41 in front of an announced attendance of 5,013 at the CFE Arena on Saturday.

The Predators suffered one of their two losses to the VooDoo earlier in the season and proved successful in redeeming themselves on Saturday.

Carr finished the game with 58 yards receiving to go with his five touchdowns. He now sits in a tie for first place in the league with 18 touchdown catches for the season.

“He’s a grown man, he’s a grown man on and off the field,” said Predators head coach Rob Keefe about Carr’s work ethic and his addition to the team. “He is coming to work and I think it shows on the football field. He literally has the eye of the tiger and guys feed off of him.

“We go a lot of the time as Greg Carr goes, and I can’t speak enough of his professional approach to the football game.”

New Orleans took an early lead in the first half but was unable to keep their composure when the Predators were able to score 35 unanswered points to bring themselves on top in the third quarter.

One of the aspects of the game that coach Keefe was happy with was his hands team on offense. Orlando successfully caught two of the two attempted on-side kicks and also recovered one more that bounced off the opposing uprights and was touched and dropped by the kick returner.

“What I was most proud of tonight was the onside hands team, thats how a team can get back into it, dribble kicking, pop kicking, and we got every single one of them back.” said coach Keefe about the multiple onside kick attempts.

Leading the teams offense was quarterback Jason Boltus, who went 19 of 31 passing for 194 yards and five touchdowns. Boltus also lead the rushing effort running for 22 yards and scoring another touchdown.

Orlando improved to 5-2 with the win to ensure their spot atop the South division.

It is worth noting that all Orlando sports team won on Saturday night with wins by Orlando City Soccer Club and the Solar Bears.

The Predators will now depart for a road trip to San Jose where they will play the Sabercats Saturday, May 3, before going on their first bye week of the season.