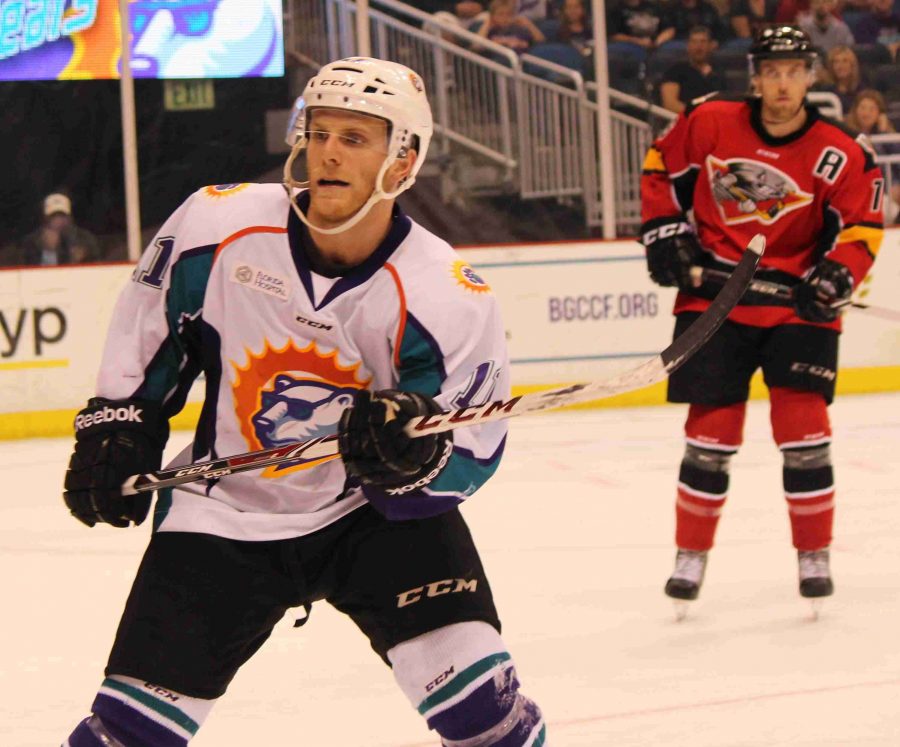 Tyler Murovich score one of Orlando's three goals in the 7-3 loss to Cincinnati.

The Orlando Solar Bears dropped game two of their quarterfinal series matchup to the Cincinnati Cyclones on Sunday night, 7-3. The Cyclones were led by Byron Froese, who had a hat trick scoring two goals in the second period and another in the third period.

“I didn’t think we were bad in the first two periods,” said Solar Bears head coach Vince Williams. “I just think it’s coming down to the little things. It’s a game of inches and we’re losing those inch battles.”

Sunday night’s win increases the Cyclones’ series lead to 2-0 with the series shifting to Cincinnati for the next three games.

“This might be the best thing for us to play with more fear,” said Williams. “More fear means when your back’s to the wall and the element is being harder. It’s not just everybody, there are some guys really playing well and opening up some eyes.”

“The one common denominator is those are hard players over 72 games of the season. We’re starting to see some players may be getting exposed in some regards and we have to find a way to simplify it,” added Williams.

The Cyclones took their largest lead of the night when Lewis scored to make it 5-2 at the 3:23 mark in the third period. The Solar Bears took goalie Cody Reichard off of the net during the final minutes of the third period and led to two empty net goals by the Cyclones.

Down two games in the series and playing on the road for the next three games, Williams said the team will look at what adjustments need to be made.

“We changed some things today and it didn’t work,” said Williams. “You make adjustments as you watch it. We have to look at the goals and what created it. The good thing was is we were there on a lot of the goals.”

The best-of-seven series continues with game three on Wednesday night in Cincinnati.