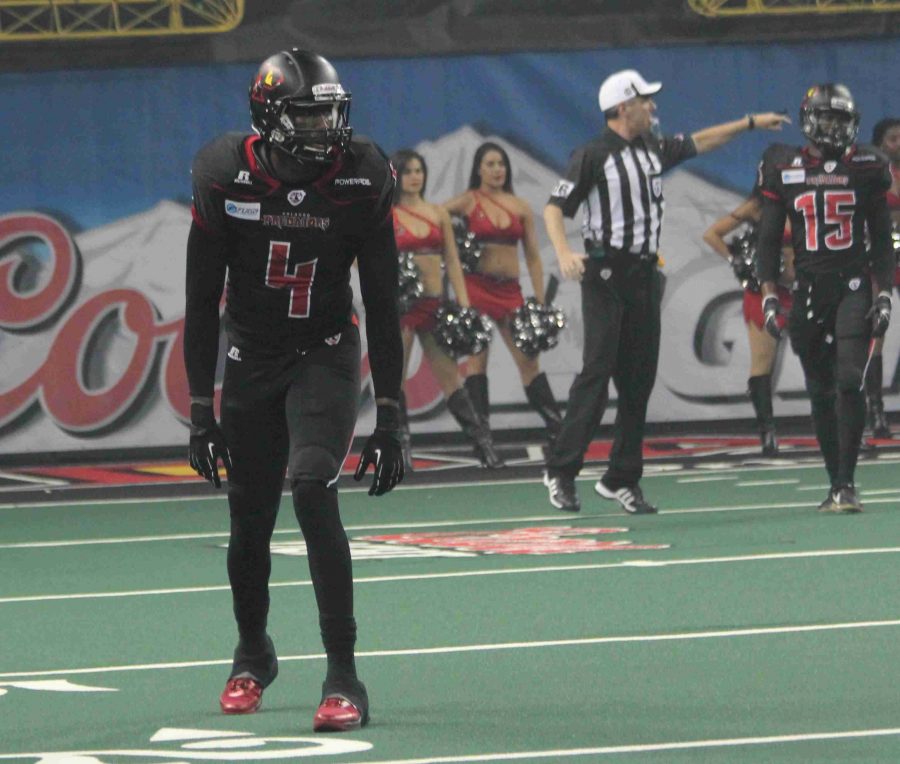 Greg Carr played both offense and defense for the Predators on Saturday against the Storm.

The Orlando Predators were able to overcome their two-game losing streak during the second installment of the War on I-4 and defeat the Tampa Bay Storm 77-65 at their home turf of the CFE Arena.

After two straight losses against the Philadelphia Soul and the New Orleans Voodoo, the Orlando Predators were eager to earn another win.

“Coming off of those two losses, we felt like we left some things out there, and to come out this game, the focus was to finish the job, go out there and play hard each and every play and make everything count.” said wide receiver Greg Carr after the game. “We tried to go out there tonight and finish the job, and that’s exactly what we were able to do.”

Carr finished the game catching 7 passes for 145 yards, 4 touchdowns and an interception. Normally an offensive player, Carr had to step up to defensive back after injuries and an ejection left the Predators without the proper personnel.

As  a defensive back Carr was able to intercept a two-point conversion attempt and run it all the way to the endzone for a 50-yard return.

Even with the win, the team wasn’t able to play perfectly, getting 12 penalties called against them giving up 61 yards.

Among the list of penalties was when quarterback Jason Boltus, who after running it in for a touchdown, in a moment of excitement punts the ball into the stands and is charged with unsportsmanlike conduct. Topping the list is the penalty against head coach Rob Keefe himself, who was hit with a flag when he was still on the field when he wasn’t supposed to be during a Storm extra point attempt in the first half.

Tensions were high as the first half came to a close when Tampa Bay receiver Joe Hills and Orlando defensive back Phillip Thomas get into a skirmish resulting in all the players, even head coach Keefe, on the field getting into a fight and trading punches. Hills and Thomas were both ejected from the game as a result.

“It’s part of the game, and being able to come out there and being able to control that rage. There are guys who will take little shots to get under your skin and we know as a team that as long as we do our talking on the field with our plays, the rest is history.” said Carr about the tussle between players.

Even with the fight and multiple hiccups throughout the game,  Boltus was still able to play a winning game throwing 21 of 27 passes for 365 yards and nine touchdowns while running in one more.

With the 77 points  scored against Tampa Bay, Orlando broke the record for amount of points scored on their home field. They also clinch a spot atop their division with a 4-2 record.

Next week Orlando will hope to improve to 5-2 when they face the New Orleans Voodoo, who defeated them two weeks ago, at home at the CFE Arena on Saturday, April 26.