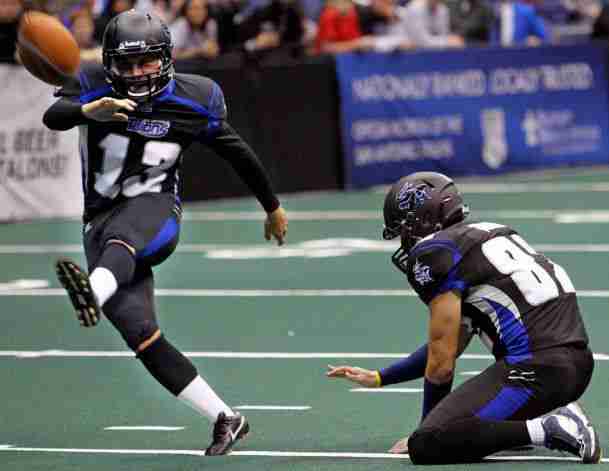 Marc Demos went 90-102 on PATs last season as a member of the Talons.

The Orlando Predators acquired placekicker Marc Demos on Wednesday and plan on having the third-year kicker active and taking PATs against the New Orleans VooDoo on Thursday.

Demos played the past two season for the San Antonio Talons, where he converted 211-241 PAT’s, while going 7-17 kicking field goals. His career-high is 41-yards.

Orlando’s addition of Demos comes the same day that they placed long-time kicker Mark Lewis on Inactive Reserve. Lewis has been nagged with a lingering leg injury since Week 2 and he did not take any kicks during the Predators 56-52 win over the Tampa Bay Storm last week.

The Predators and Demos take on the VooDoo Thursday, April 3 at the Smoothie King Center. Kickoff is scheduled for 8:30 p.m. Eastern Standard Time, with the game being streamed on ESPN3.com