Solar Bears sit one point away from clinching a playoff spot 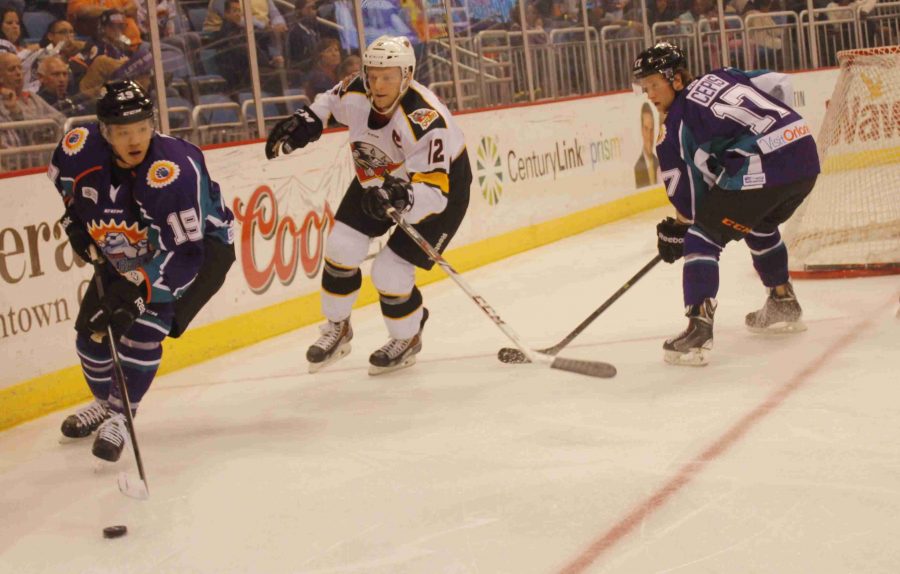 The Orlando Solar Bears overcame a two-goal deficit to beat the Evansville IceMen 5-4 on Saturday night in front of an announced crowd of 8,458 at the Amway Center.

Connor Goggin and Jacob Cepis both scored two goals to help lead the Solar Bears to victory. Taylor Matson scored the other goal for the Orlando, who improved to 40-22-2-2 on the season.

“It’s huge,” said Cepis of the team’s ability to overcome a two-goal deficit. “We need to take this into next week. The biggest thing is on games like that you can’t give up. It’s a credit to our team. We worked really hard and never gave up.”

“I thought the couple [of goals] there just looked a little too easy,” said Williams. “The move gave [the team] a chance. We don’t want to get into a carousel of back and forth. I thought these guys needed to wake up and do better and shake it up a little bit.”

The Solar Bears are in the middle of a playoff battle with six games to go in the regular season. With Saturday night’s win, the Solar Bears moved one point away from clinching a berth in the playoffs, but still face a tough stretch of games.

The team begins a three-game road trip starting Wednesday that will take them to Reading, Elmira and Wheeling, with Reading and Wheeling currently bound for the playoffs.

“We are a good road team,” said Williams. “We are better on the road sometimes. They are buildings that I’m familiar with so they are great challenges and have our focus. We just came off of the road, the road doesn’t scare us. It’s going to be a good test against Reading and they won tonight and are in first.”