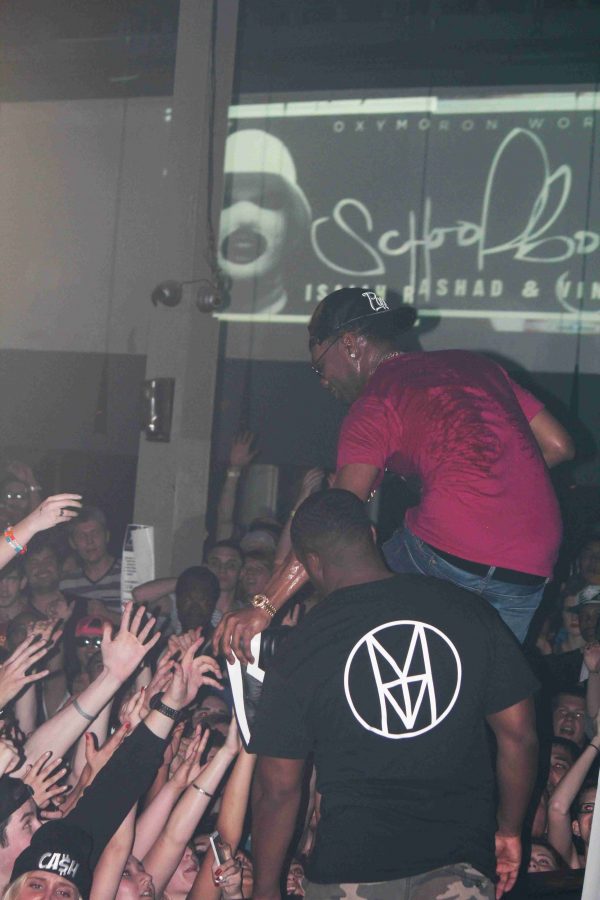 Juicy J giving away his sneakers during his 'Never Sober Tour' at the Firestone Live in Orlando, Fla. on Feb. 21, 2014. (Ty Wright / Valencia Voice)

Much like many aspects of Juicy J career, the complete details surrounding his scholarship giveaway were misunderstood.

“A lot of people didn’t read in between the lines, they should have read the fine print,” said the rapper in an exclusive interview with the Voice, following his “Never Sober Tour” in Orlando.

Zaire Holmes, a 19-year-old single mother out of Florida, was selected to receive the $50,000 “twerk scholarship,” which ultimately had nothing to do with twerking at all.

“I said: ‘send in a video showing me why you deserve this $50,000 scholarship.’ A young lady sent in a video and showed me that she had friends, and a professor at her university to show how good she was in school and how much of a hard worker she was,” said the rapper out of Memphis, Tenn. “I donated the money for her to go to school. It was genuine.”

After Juicy J’s accountant and lawyer work out a few minor kinks — in a few pieces of paperwork that still needs to be signed — more scholarship opportunities will be available thanks to the rappers upcoming project, The Juicy J Scholarship Foundation.

“I got more surprises for everyone, so make sure you get your education and stay in school,” he says.

Juicy J has been in the music business for more than 20 years and feels as if he is on his second-to-third running in this rap game. With new ventures on the horizon: music, album, television appearances and movie roles; he stated that he is doing things bigger than ever before (even bigger than he was doing back in his Three 6 Mafia days).

“I’m here to stay. I got a lot of new stuff coming soon. New television shows, new ventures and new everything;  2014 is about to go down,” he says.

Juicy J has even included his philanthropist ways into his show, going as far as giving away shows directly off of his feet.