Culinary Student Honored with Chance of a Lifetime 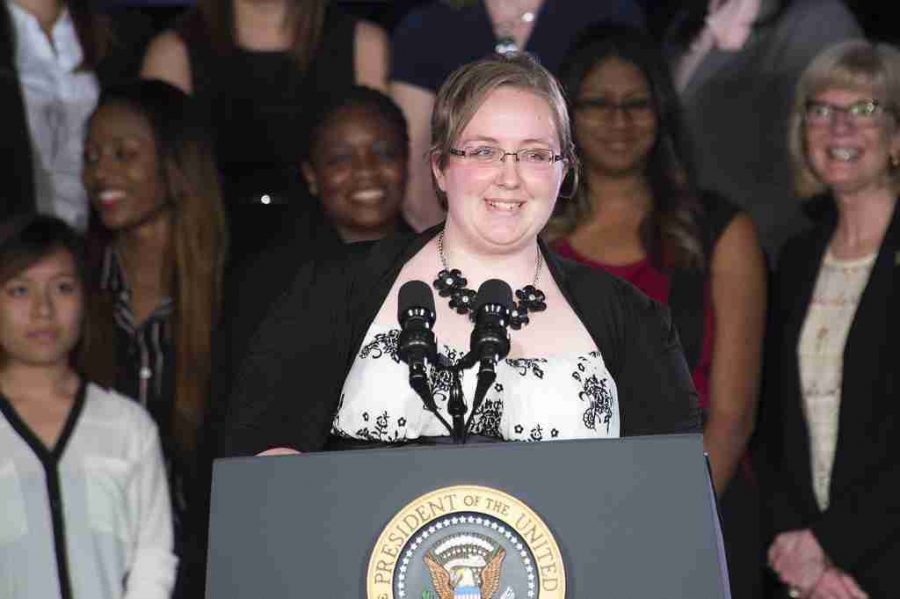 It didn’t take long for Carolyn Verno to be fed up with making $8.25 an hour before leaving what she called “a dead end” job to pursue greater ventures. The progress she has made since enrolling at Valencia in 2012 led her to a chance of a lifetime.

Meeting the President of the United States.

“First thing that came to my mind is ‘holy crap, why me’. Of course it’s an honor, I was ecstatic,” said Verno. “This was obviously a once in a lifetime opportunity.”

Verno, a 25 year old student in Valencia’s Hospitality and Culinary program, was the only student chosen to take part in a roundtable discussion with the president. Along with West Campus president Dr. Falecia Williams, and Verno’s career program advisor Lynn Desjarlais, the three sat with the president and discussed the hardships they have endured in their lives.

“He wants to make it easier for us to achieve everything we want to achieve in life to be happy and be successful, have families, and not have to worry about what’s going to happen,” said Verno.

Dr. Williams spoke to the president of her being raised by a single mother, who was blind, and having struggles coming up. Dr. Williams herself had a premature child, which even forced her mother to help her out.

“The president was very warm, very genuine and compassionate,” said Dr. Williams. “He was very understanding and wanted to know about our journeys, our achievements and our obstacles.”

Verno serves as an officer in Valencia’s Culinary Student Association. She helps organize many of the club’s efforts, including collecting food for migrant workers.

She was also given the honor of standing in front of government officials, faculty and staff, fellow students and the entire country watching through live stream, as she introduced the president to the audience at the Special Events Center.

“I did a speech at the board of trustees meeting a couple weeks ago, and Dr. Williams apparently really liked me, so she suggested me, and that’s that,” said Verno.

Verno has juggled many part-time jobs while attending college, including several bakeries. She and her husband, who holds three A.S degrees in computer technology from Valencia, may soon relocate with the hopes that they can one day open a bakery of their own.

She knows that the biggest obstacle many people face in their lives comes from within.

“Don’t be afraid to achieve your goals, said Verno. Don’t worry about what’s going to happen, just go for it.”