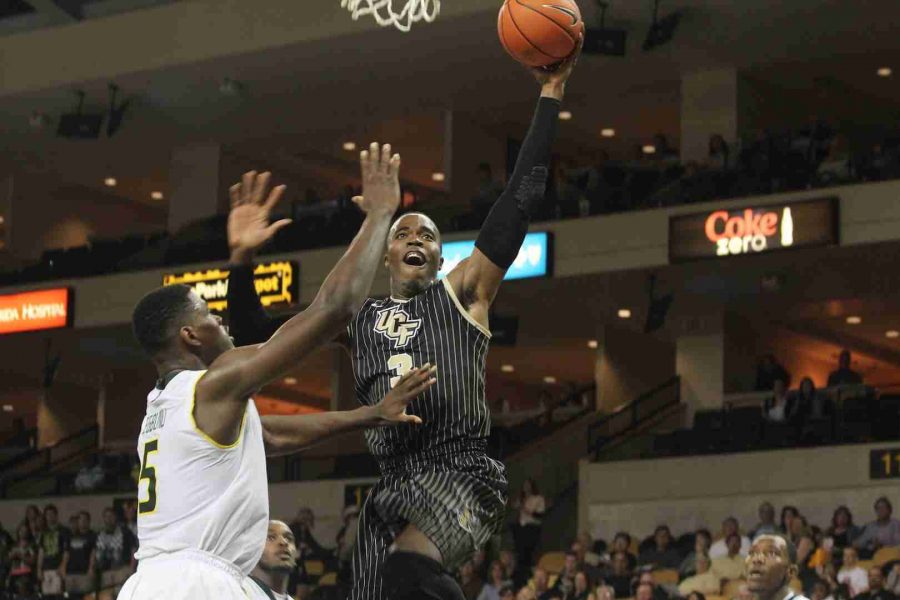 Isaiah Sykes scored 24 points and had 12 rebounds in UCF's overtime lose to USF on Wednesday.

USF and UCF kept the “War On I-4” rivalry interesting by going into overtime in their first-ever meeting as conference opponents on Wednesday.

Victor Rudd had 25 points and 10 rebounds for the Bulls, helping them defeat the rival Knights 79-78 in overtime in front of an announced crowd of 6,108 at CFE Arena.

“Victor Rudd made some big time plays today, and he did it not once, twice, three, four or five times, he made some big plays,” said UCF head coach Donnie Jones about the game’s leading scorer. “And you know what Isaiah Sykes made some good plays.”

USF pounded UCF on the inside during the first half, outscoring the Knights 24-12 in the paint.

Despite being out rebounded the Bulls went into halftime leading 37-36, while four players had 7 points each at the end of the opening half.

The game went back-and-forth for much of the second half, with UCF grabbing a one-point lead with 1:02 remaining in regulation. USF tied the game up at 70-70 when Rudd put in a layup with 9 seconds left in the game. The Knights would have the opportunity for the win, but Calvin Newell’s jumper went begging as time expired.

Coach Jones said after the game that the plan at the end of regulation was to to push the ball up all the way to the rim for the final play of the game, and that Newell lost track of the time and had to take a jumper.

“We decided to go ahead and just push it at the end, miss or make, while their defense wasn’t set and try and get to the rim,” said Jones.”But we fell short of that.”

Following the game UCF senior Isaiah Sykes said “no comment” when asked if the team knew how much time was left on that final play of regulation.

Sykes finished the game with 24 points and 12 rebounds, for his third double-double of the season.

The Bulls started overtime on a 8-2 run, but UCF used a 6-0 rub of their own to ties the game back up at 78-78 with 57 seconds left in overtime. The Knights had the opportunity to win the game when Isaiah Sykes went for a game-winning lay-up with .8 seconds remaining, only to have it blocked by John Egbunu.

“The play broke down,” said Sykes about his potential game-winning drive. “That’s something we need to do better with discipline.”

UCF’s Kasey Wilson then fouled Shemiye McLendon, setting up USF with two free throws with less than a second remaining. McLendon would make the first and then purposely miss the second for the Bulls.

Newell took a full court shot for the win, but just missed being a hero.

Rudd scored 8 out of USF’s 9 points in overtime, accounting for all the Bulls’ points besides the game-winning free throw.

The win puts USF over the .500 mark and improves their record to 12-11, while going 3-7 in conference play. With the win Bulls head coach Stan Heath also gets his 100th victory at USF, making him the 4th coach with that many wins at the University.

USF also extends their lead in the series to 21-7 all-time against the Knights.

UCF’s record now falls to 9-11, as the Knights are currently on a seven-game losing streak.

The Knights next game will be on Sunday against the UCONN Huskies at CFE Arena, with the game scheduled to tip-off at 6 p.m. and being televised on ESPN 2.