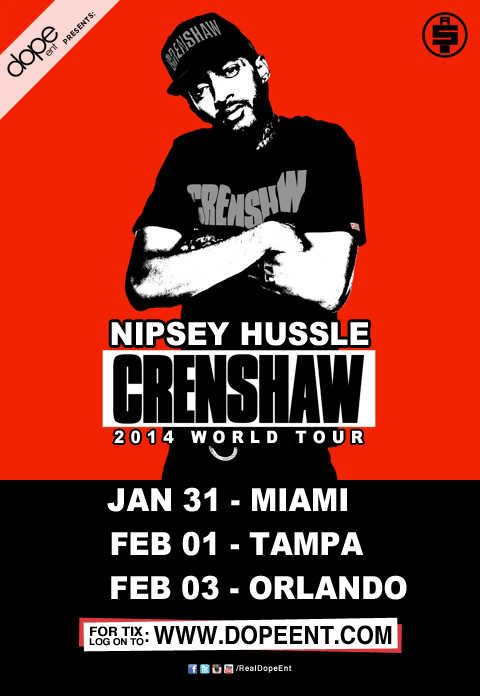 Nipsey Hussle is set to bring his “Crenshaw” tour to Orlando.

Nipsey released the “Crenshaw” mix-tape as a free download in October. He made $100 thousand from a limited edition version of the mixtape that sold for $100 each. The limited edition mixtape included incentives from his All Money In record label.

He made a guest appearance on “Upside Down,” a song from rapper Snoop Dogg’s “Malice n Wonderland” album. He has also appeared on song “Killer” with Drake.

Nipsey was chosen as one of ten up-and-coming artists in 2010 to be featured in XXL Magazine’s annual “Top 10 Freshman” list. He was tabbed “Most Determined.” He also appeared on the song “We Are the World 25 for Haiti,” a charity single recorded to benefit people in Haiti after the devastating earthquake in 2010.

Rapping is not the only skill that Nipsey was blessed with. He is also an actor. He played a role in the film “I Tried,” in 2007. The picture was a semi-autobiographical film based on the hip-hop group Bone Thugs-N-Harmony.

The “Crenshaw” tour will make its way to Firestone Live on Feb. 3. The show starts at 8 p.m.

Tickets are available online via TicketWeb for $20.