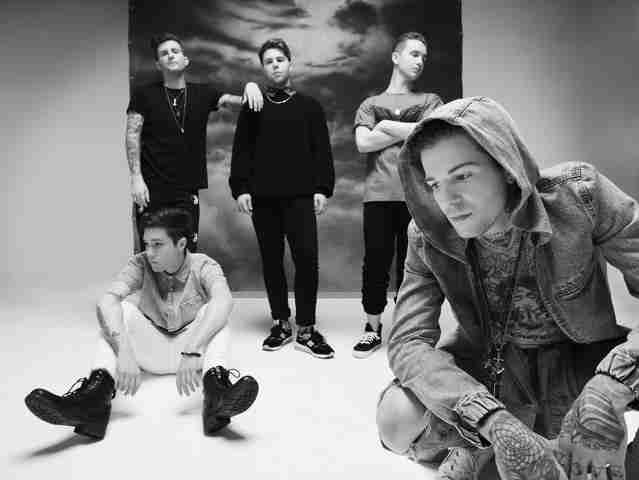 Have you turned on your TV lately and thought something was wrong with your antenna — thought maybe you went to sleep and woke up in the early 1900’s — because everything was in black and white?

Have no fear, you were probably just watching a music video by breakout rock group The Neighbourhood.

Don’t let their name fool you, The Neighbourhood is not a band out of the U.K. In fact, the band who plans to be the biggest group of all time reigns from the West Coast. California to be exact.

Members Mikey Margott, Jeremy Freedman and Zach Abels were best friends growing up and started a hardcore punk band in high school. Through that they met Jesse Rutherford in his band — became best friends and never looked backed on anything else.

“I personally couldn’t do college,” said Abels, one-of-the-band’s-two guitarists. “That whole thing doesn’t make sense to me. I’d rather work my ass off in something else that I was interested in.”

The Neighbourhood sound mixes your traditional alternative rock sounds with a genre that has not even been created yet. When the guitarist biggest influences are Metallica, the Beatles and failure, and the the lead singer comes from a background that has a big influence on the production and even how he writes his melodies, the group as a whole is set to stick out.

The group has built a platform around the colors black and white, which has become their vision and everything that represents them.

“We make decisions based off of the world we live in which is black and white. So when anyone wants to work with us in anyway they have to have respect with our vision for it to work out,” said Abels. “We selected black and white because it felt right with everything we wanted to do, like the vibe of our music to our artwork. It just made sense to us doing it that way.”

The group broke out into the spotlight in 2013 following the release of their single “Sweater Weather,” which reached the top of the Alternative chart and stayed there for 11 non-consecutive weeks.

While the group is extremely grateful of the success that they have attained, they are not satisfied with their progress and still feels as if they have so much more to prove. Not only to themselves but to everyone who has supported them thus far. “ We’re always thinking what’s next and we won’t stop until we get to the level that we want to be at,” stated Abels.

The Neighbourhood continues to push the boundaries and has no problem being different. In their “Afraid” video, the band aimed to make everyone watching it feel vulnerable.

“Our way of doing it was to literally have someone naked in the video and make the audience feel uncomfortable and be as raw and real as possible with them. And yes I do think it conveyed the message that we were trying to say,” said Abels.

The group made multiple stops in Central Florida in 2013, touring in support of Imagine Dragons and performing in the first ever Coastline Festival presented by Live Nation.

“It was really fun! Our set time was right when the sun was setting so it set a really cool vibe for our performance and the crowd was ridiculously good,” Abels recalls.

Like many of the bands on the Coastline bill, The Neighbourhood had a pretty amazing year as breakthrough artist. With a new year just underway, the sky’s the limit for the Hoodlum’s commanders.

“All I can say is that we’re going to keep moving forward and pushing boundaries as much as possible and we’ll see what comes from it.”