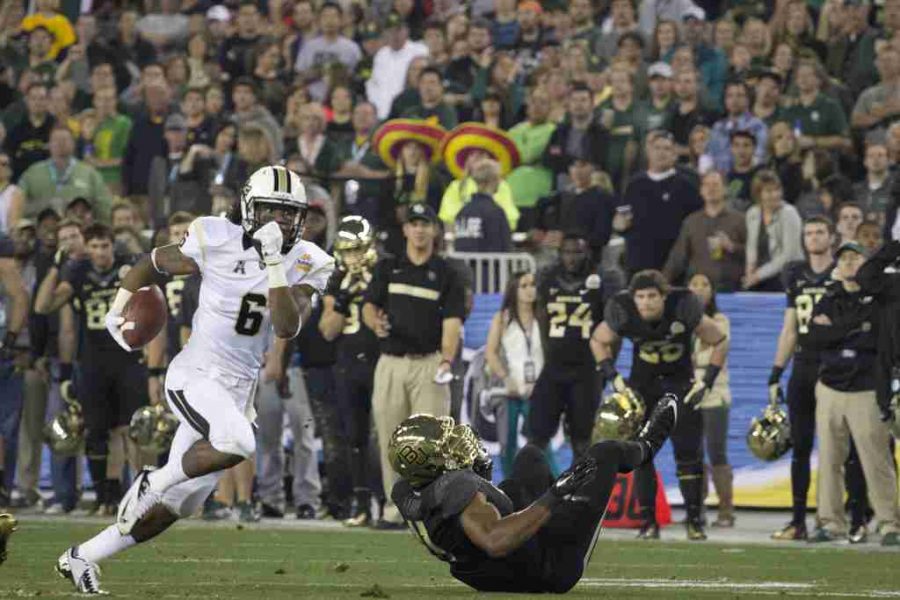 “Well, I’m very happy for the program.” said UCF head coach George O’Leary during the post-game press conference. “I’ve always deflected everything to the players. You know, players win football games. Coaches just get them in the right direction.”

UCF jumped out to an early 14-0 lead midway through the opening quarter and the Knights really wouldn’t look back from there.

Bortles kept the Bears defense at bay by using a lot of read option plays and extending plays outside the pocket.

“I think they did a good job running the zone read most of the night. QB hasn’t carried the ball much throughout the year, but he was very effective tonight.” said Baylor head coach Art Briles following the game. “We didn’t tackle as well in space as what we would have liked to, without question. Consequently it came to hurt us.”

Baylor was able to tie the game at one in the third quarter at 28-28 after Bryce Petty rushed it in from the 1-yard line for a touchdown and then also rushed in the two-point conversion.

The Knights would go on to score 14 unanswered points thanks to a Bortles pass to Breshad Perriman and a 15 yard quarterback keeper.

The Bears forced 3 UCF turnovers but only managed to capitalize on one of those and turn them into points.

With the win the Knights finish the season with a 12-1 record and will return to Orlando as not only the American Athletic Conference champions, but also champions of the Fiesta Bowl.

“I think anytime you win 12 games in a season, it’s great for your program, I think great for everybody that’s associated with the program.” said O’Leary after the game.

Baylor will now return to Waco, Texas sporting a 11-2 record and will now begin to look ahead to the 2014 season.

The 52 points scored by UCF is the most the Knights have scored against a ranked opponent in school history.

Now UCF waits on Bortles to make a decision on whether he returns for his senior season or if he goes into this year’s NFL Draft.

“Building chemistry on and off the field is what we strive on.” said the redshirt junior when asked what kind of legacy he will leave at UCF. “Hopefully that will be my legacy at the end, He was a big team guy, he played well with other people and he was part of a successful team.”