Magic get blown out by rival Heat 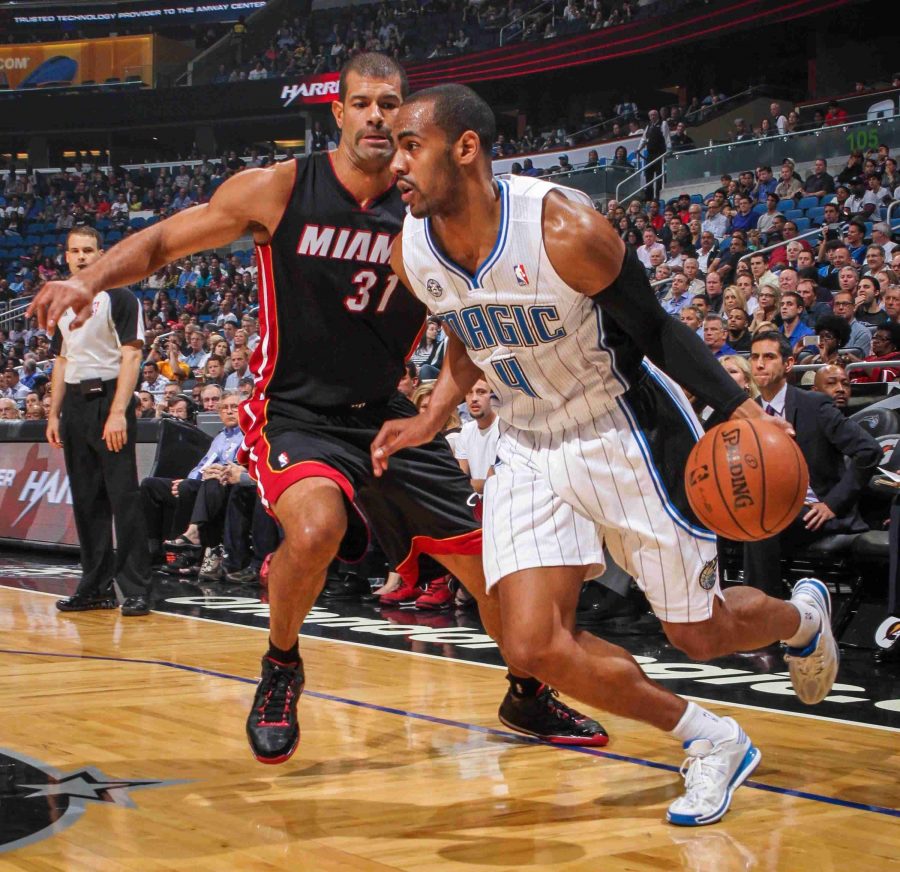 Arron Afflalo (right) scored 30 points against the Heat , giving him 91 points in the past three games.

Arron Afflalo had 30 points, while going 7-9 from behind the 3-point line, but it wasn’t enough as the defending world champion Miami Heat defeated the Orlando Magic 120-92 on Wednesday in front of an announced attendance of 17,256 at the Amway Center.

“I think it’s another night of Arron being extremely efficient,” said Magic head coach Jacque Vaughn about Afflalo. “That really boils down to him really having a laser focus.”

The Magic historically play well against the Heat but Miami’s 3-point shooting was too much for Orlando to overcome. Miami finished the game shooting 14-21 from behind the line.

Miami started the game on a 16-0 run, before coach Vaughn was forced to call a timeout with 8:26 remaining in the opening quarter. The Magic would do a good job of keeping the game close throughout the first half, but Orlando couldn’t keep the pace in the third quarter.

“I thought that we responded pretty well from that. We get to halftime down five,” said Vaughn after the game. “I wasn’t to concerned about the 16-0 run. We had a couple of early mistakes in the game that gave up a couple of three’s but that;s a good ball team.”

The Heat would go on to outscore the Magic 36-22 in the third quarter, thanks in part to 14 points from James Jones, which came from four 3-pointers and two made free throws.

Things would only get worse for Orlando in the fourth quarter, when center Nik Vucevic fouled out with 10:05 remaining in the game. Vucevic finished the night with six points and six rebounds.

Orlando was outscored by Miami 66-43 during the second half, while also being outrebounded 40-25 for the game.

“They are a team that a lot of times after halftime they make adjustments and they come out and get in fourth and fifth gear,” said Vaughn about the Heat’s second half performance. “LeBron established himself and they have shooters all around.”

Rookie guard Victor Oladipo did make his first career NBA start for the Magic on Wednesday, he finished the game with 20 points, five steals, four rebounds and eight turnovers. Oladipo found out that he was in the starting lineup three hours before tip-off but the rookie wasn’t nervous.

“Not so much nervous, more anxious, more excited than anything.” said Oladipo about how he felt before his first NBA start. “It was cool, it was just an honor and a blessing to be able to start an NBA basketball game.

“I’ve just got to continue to keep working hard so eventually when I do start another game it won’t be the first or the last time.” added Oladipo.

With the loss the Magic’s record falls to 4-7, while the Heat improve to 9-3. LeBron James led Miami in scoring with his 21 points, while adding six rebounds and seven assists.

“I am gifted and I don’t take it for granted,” said James following the 28-point victory. “I welcome my game but I also know that I was given God given ability to do some special things and I just try to take full advantage of it.”

Dwayne Wade didn’t play on Wednesday, as he was still nursing a knee injury. He could be ready to play on Saturday against the Magic.

Magic fans didn’t leave the Amway Center that upset though, as everyone in attendance earned a free Chick-fil-A spicy chicken sandwich because they hit five 3-pointers.  The promotion will run through the 2013-14 season and can be redeemed at any participating Chick-fil-A in Central Florida.

Orlando will now have a couple of days of practice before traveling to Miami to play these same Heat on Saturday night at the AmericanAirlines Arena.