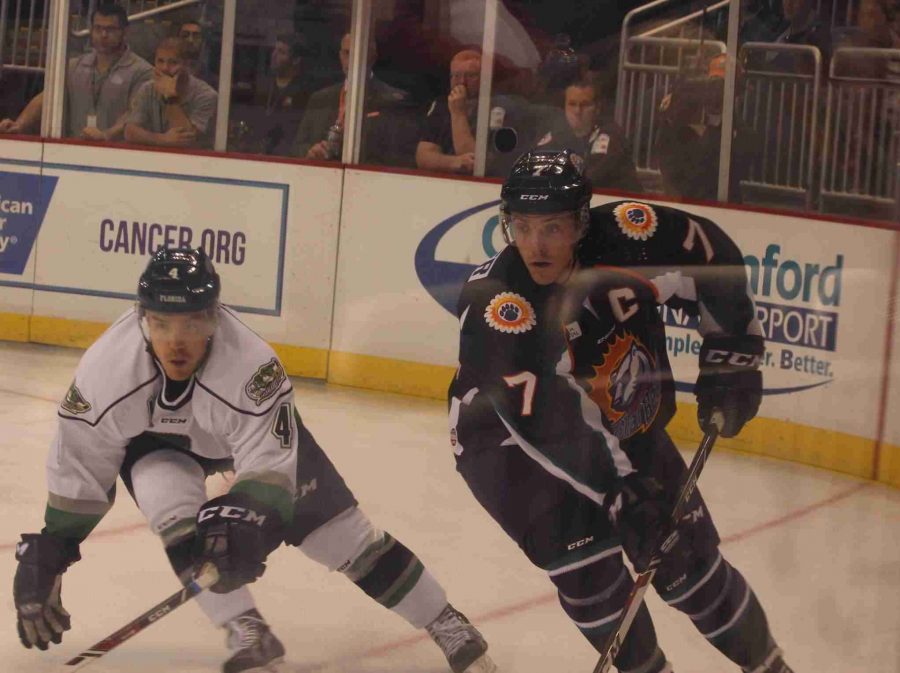 Eric Baier (right) fights for position during the Solar Bears 2-1 loss to the Everblades on Saturday.

Brandon MacLean scored two goals as the Florida Everblades defeated the Orlando Solar Bears 2-1 on Saturday in front of an announced attendance of 6,393 at the Amway Center on Orlando City Soccer Night.

Orlando fell to the Everblades a day after the Solar Bears had a 3-2 shootout win on the road in Florida.

Central Florida native Ian Slater put the Solar Bears on the scoreboard first when he scored a power play goal 8:33 into the opening period, thanks in part to assists from C.J. Severyn and Mike Ullrich.

“Championship team’s aren’t made in the first ten games of the year,” said Slater following the game. “And this is going to be an ongoing thing.

“It literally comes down to finest of details, bringing the boys together, but it is coming together slowly.” added Slater.

Florida tied the game at 1-1 a little over a minute into the second period when MacLean scored on a pass from Mike Cornell.

MacLean added another goal with 6:02 remaining in the second stanza, giving the Everblades a 2-1 lead. This time MacLean’s goal came on a Solar Bears power play, Orlando finished the game 1-6 on power plays, while on allowing a goal on the penalty kill.

“We’ve got to execute,” said Solar Bears head coach Vince Williams about the team’s performance on the power play. “We’ve got to get guys in there and get in the dirty areas and simplify it.

“You have to outnumber and outwit your opponent.” added Williams.

The Everblades managed to outshoot the Solar Bears 22-7 during the second period after being outshot by Orlando 12-8 in the opening stanza.

Orlando couldn’t get much offense going in the third period, as they managed only five shots on net during the stanza.

Solar Bears goaltender Christopher Gibson played well in between the pipes, saving 37-39 shots for the game, but it wasn’t enough to stop Orlando from losing their fourth game of the season.

“It’s frustrating when they’re doing everything they can and the outcome is what the way it is.” said Slater when asked about the play of his goalie.

Orlando will now have a couple of days off before taking on the Elmira Jackals on Thursday, Nov. 7 at the Amway Center.