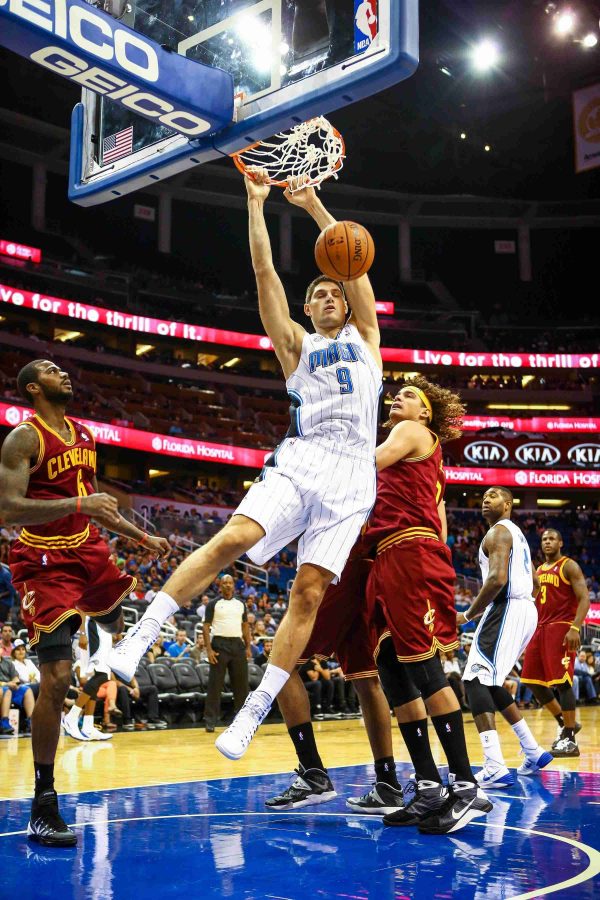 Orlando Magic Center Nikola Vucevic (9) dunks during first-quarter action of a preseason game against the Cleveland Cavaliers at Amway Center.

Anthony Bennett’s strong play down the stretch helped the Cleveland Cavilers overcome a double digit second half deficit to go on and defeat the Orlando Magic 110-105 Friday night at the Amway Center.

The No. 1 overall pick, Bennett, got hot late in the game and scored all 16 of his total points in the fourth quarter.

“It was good. We know the young fellow (Bennett) can score, that’s what he did in college,” said Cavaliers head coach Mike Brown, in regards to the rookie’s performance. “He can score in a lot of different ways. You guys only saw a taste of it.

“Believe me, he can’t put that thing in the hole. So just to see it go in the hole in a few different ways, it was great because he needed that confidence boost.”

The Magic’s started the game off with an early lead thanks to the play of big man Nikola Vucevic, who created scoring opportunities for both himself and teammates when he decided to play with his back to the basket.

“I worked a lot on my post game over the summer, something I wanted to improve in comparison to last season. I had more confidence in it, and I just wanted to be aggressive and be able to score down there and make good plays,” said Vucevic. If I get better at scoring in the post then the defenses are going to have to focus on me and that will be able to space the floor for the other guys.

Vucevic was efficient from the field; shooting 50 percent for the game, and netting 15 points and six rebounds.

“He (Nikola) showed a real aggressive tonight. He wanted the basketball; he wanted his teammates to give it to him,” said Magic head coach Jacque Vaughn.

Trailing by as much as 18 points, Cleveland managed to get back into the game thanks to their ability to get to the charity stripe, out-shooting the Magic 46-19 from the free-throw line.

“I say if we don’t allow them to have 46 free throws we would be in pretty good shape.

“We out rebounded them which is weird but they shot 46 free throws. Sometimes that was them getting second chances. You’ve got to give yourself a chance a little bit.

Rookie guard Victor Oladipo led the Magic in scoring with 18 points; as four players scored in double digits for the team.

Dion Waters had a game high 21 points for the Cavilers. Kyrie Irving contributed for 17 points and five- assist.

The Magic will travel to the American Airlines Arena Monday, Oct. 14 to face the Dallas Mavericks.