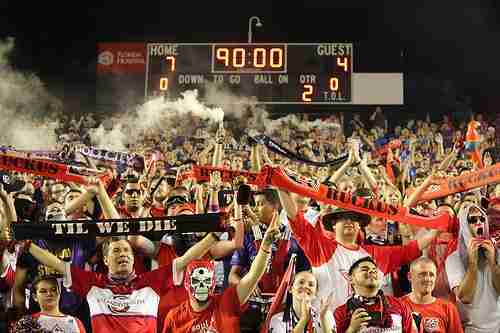 Orlando City SC fans at the Citrus Bowl during the USL Pro championship.

The Orlando City Soccer Club got one step closer to making their stadium dreams come true on Monday afternoon.

The City of Orlando Board of Commissioners voted unanimously for funding for a downtown soccer-specific stadium, which will bring an MLS expansion franchise to Central Florida for the first time ever.

“This is obviously a very big step toward our goal of bringing MLS,” Orlando City President Phil Rawlins said in a statement. “I am delighted to have the City behind us so we can now focus on the second vote that is only two weeks away.”

Despite various set-backs earlier this year, both City of Orlando Mayor Buddy Dyer and Orange County Mayor Teresa Jacobs agreed to push money from the Tourist Development Tax (TDT) in favor for building a soccer stadium in the Parramore neighborhood by downtown Orlando.

The Orange County Board of Commissioners can finalize the funding, when they vote on Oct. 22, which is open to the public. If five votes are in favor for a stadium, then the TDT will given to the Lions for the final missing puzzle piece.