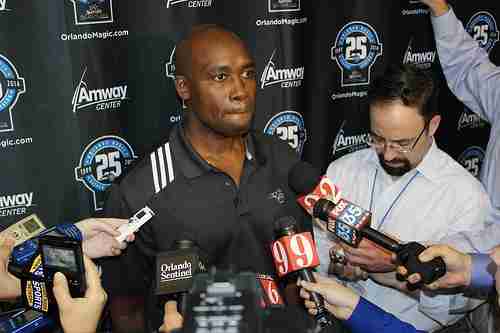 After finishing the 2012/2013 season with the worst record in the NBA, 20-62, head coach Jacque Vaughn addressed members of the press, previewing the upcoming season, the nucleus of young players and the role veteran players will play once the ball tips off in October.

After being quiet in the free-agent market for most of the offseason, the focus on the upcoming season shifted to the role that Victor Oladipo, the No. 2 draft pick back in June, will play once the Magic season starts.

“Let’s say, I think our past has shown we put guys on the floor, that’s the greatest way to learn,” said the 38-year-old coach. “He’ll have his chance to be on the floor, but he’ll earn those minutes. He’s a guy that’s going to bring a certain amount of work ethic to our practice and games our fans are excited to see.”

Orlando Magic general manager Rob Hennigan spoke shortly afterwards coach Vaughn, telling the press that the upcoming season is all about building off the momentum from last season.

“I think anytime you can try to activate some chemistry, that’s always a good thing,” said Hennigan. “I think the time our players were able to spend together this summer is the right step in the direction.

While optimism surrounded the upcoming season, questions arose on whether the Magic will be ale to compete, especially in regards to keeping the fans in attendance satisfied. According to an Orlando Sentinel article published in March, the Central Florida basketball team averaged 13,455 last season despite taking a slight decrease after Dwight Howard’s exit.

“The goal is to stay in the building. We feel really confident in the vision that we have and now it’s just the matter to staying true to those steps,” said Hennigan. “It’s about focusing on our steps that’s in front of us and getting over that.”

The status of forward Glen “Big Baby” Davis was another key topic that was brought up. Valencia Voice reporter Danny Morales reported earlier in September that former LSU Tiger was seen training mix martial arts with a local fighter during his rehab stage, following foot surgery in the summer.

“I would say we hope to have him back in the new few weeks, but a lot will be dictated,” said Hennigan. “I think anytime you experience an injury, it’s frustrating for any professional athlete. Glen has had a few setbacks last year in the health front and he certainly understands that can happen to anybody.