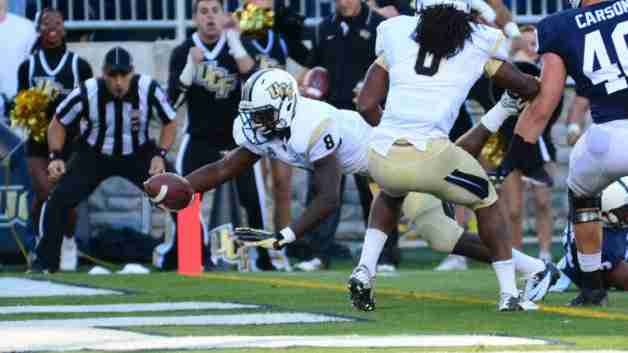 Blake Bortles threw for 288 yards passing and three touchdowns, helping the UCF Knights defeat the Penn State Nittany Lions 34-31 on Saturday night in front of a crowd of 92,855 at Beaver Stadium in University Park, Pa.

UCF had a 21-10 lead going into halftime, but Penn State scored 14 points in the fourth quarter to come within three points of the Knights with 2:51 remaining in the game.

The Knights were able to run out the clock following the Nittany Lions touchdown and leave Happy Valley with the program’s first win over Penn State in school history.

The win improves UCF’s record to 3-0 through Week 3 of the season and gives the Knights their first 3-0 start since 1988, when the program was still in Division II.

Bortles three passing touchdowns tied his career high for touchdowns in a game, which he set in Week 1 against Akron. UCF finished the game with 507 yards of total offense, marking the first time this season that they have broken the 500 yard mark.

Storm Johnson added 117 yards rushing for the Knights, scoring one touchdown and helping run out the clock at the end of the game.

UCF will now have a bye week before facing off against South Carolina at home on Saturday, Sept. 28.