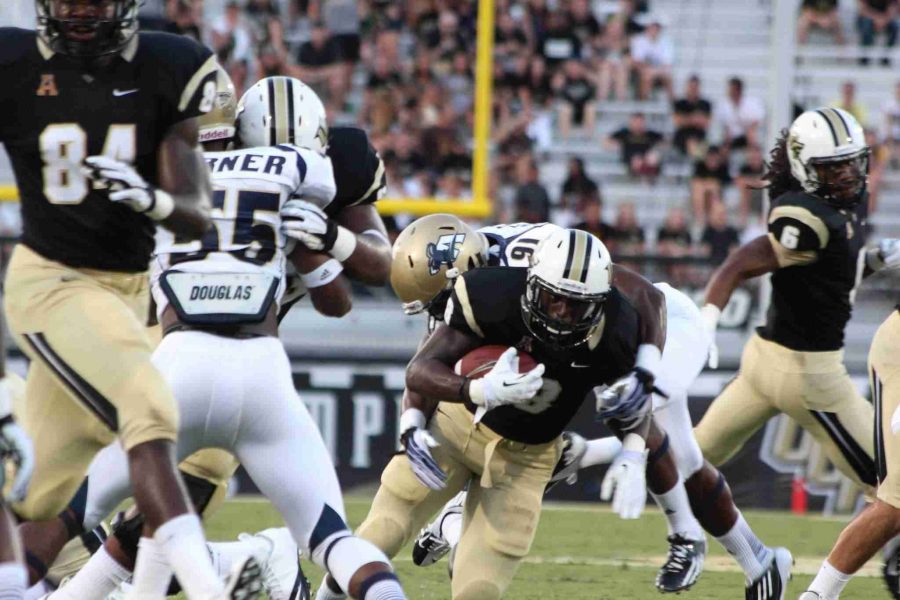 ORLANDO — Quarterback Blake Bortles threw for 314 yards and three touchdowns, helping the University of Central Florida Knights defeat the Akron Zips 38-7, Thursday night,  in front of an announced attendance of 35,115 in the Knights first game as members of the American Athletic Conference (AAC)

Bortles threw an AAC record 91-yard touchdown pass to Breshad Perriman on UCF’s second play from scrimmage, giving the Knights an early 7-0 lead. The touchdown came after Bortles was sacked and fumbled the ball on the opening play of the Knights first drive.

“I thought Blake stepped up and I think he has a world of talent,” said UCF head coach George O’Leary about his starting quarterback. “We just got to make sure we keep things going in the right direction with him.”

“I haven’t really thought about that. That’s new to me too,” said Perriman about his spot in the AAC record books.

UCF added another touchdown with 2:23 remaining in the opening quarter, thanks to a 19-yard touchdown pass from Bortles to junior Rannell Hall, extending the Knights lead to 14-0 over the Zips.

Bortles made a highlight reel play midway through the second quarter, when he hit J.J. Worton for a 39-yard touchdown pass after he lost a handle on the ball following the snap.

“That’s what separates the quarterbacks that can make plays and can’t make them,” said O’Leary about his quarterback’s highlight reel play. “Obviously I thought he was on top of his game.”

Bortles was pulled from the game at the start of the fourth quarter with the Knights leading 38-0. Redshirt junior Tyler Gabbert finished the game under center for UCF, going 1-3 for five yards passing during the final 15 minutes of the game.

Running back Storm Johnson added two rushing touchdown in the third quarter, extending the Knights lead to 38-0 entering the fourth quarter. Johnson finished the night with a career high 99 yards rushing on 20 carries.

“We can run it, we can throw it,” said O’Leary about his offense after the game. “Weather it’s run or pass I think we’ve got some talented athletes that can do those things.”

UCF’s defense gave up the shutout in the dying seconds of the game when Akron quarterback Nick Hirschman hit Imani Davis for a 11-yard touchdown pass with 42 seconds remaining in the game.

“They have a lot of playmakers,” said Akron head coach Terry Bowden about the Knights. “UCF is as good as it gets in the American conference – they are the cream of the crop.”

“I’m pleased with the first game as far as getting some turnovers, not turning it over and just getting a chance to play a bunch of players,” said O’Leary after the game.

The Knights next game is on Friday, September 6, against the Florida International University (FIU) Golden Panthers in Miami. UCF defeated FIU 33-20 last season when they faced off in Orlando.