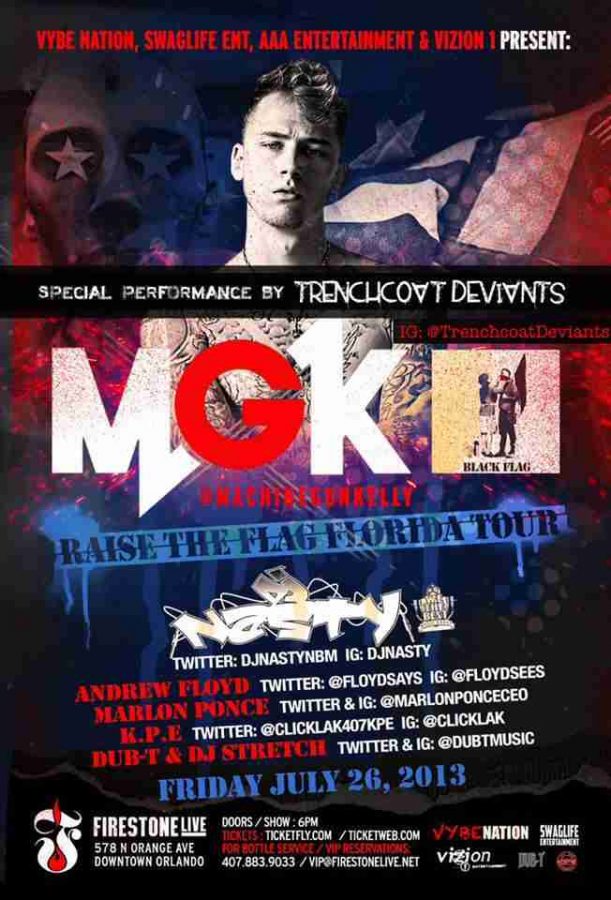 Fresh off the “Lace Up” tour, Machine Gun Kelly (MGK) returns to Florida for the biggest four-city tour the state has ever witnessed in support of his new project, Black Flag, available now for free online.

“You see we’re coming right back, we were just there a month ago,” stated the wild boy out of Cleveland, in a recent interview with the Voice. “We got a ton of love for Florida, just like they got for us. So if we can go to the same place and sell out two-times in a month damn near — that’s a second home for me.”

Although Black Flag was released as a mixtape, MGK promoted it like an album and informed his fans and media to treat it as if it was his second release.  When asked about the concerns regarding his street album possibly receiving less light due to other artist releasing studio albums, MGK simply responded “I know my shit’s better, I don’t give a f**k.”

The 23-year-old artist stated that Black Flag has received some of the greatest compliments any of his projects have ever seen — even those of his debut album Lace Up.

“We just wanted to get the people involved and give them a reason to come home and get on the internet,” added MGK.

After releasing a statement on his official website regarding the concept behind Black Flag, the EST leader started a countdown — the clock counted down eleven times, with each countdown period being named “Operation…” where fans would receive items like the album booklet and song previews before receiving the final project on June 25.

“It gave people a reason to act.  I knew tomorrow was strikes coming so I had to move — I got to help this shit go,” MGK said. “The power of Black Flag is in the people hand.”

The “Raise The Flag Florida Tour” makes it way to Firestone Live this Friday, July 26.  Doors ope up at 6 p.m with the show starting promptly at 7 p.m. Supporting acts are as followed: Andrew Floyd, Mark Ponce, K.P.E, Dub-T and DJ Stretch, and the Trenchcoat Deviants.

Tickets start at $30 with meet-and-greet packages available for $100 via Ticketfly. Tickets will be sold at the door if space is available – however this show is projected to sell-out so purchase them while supplies last.