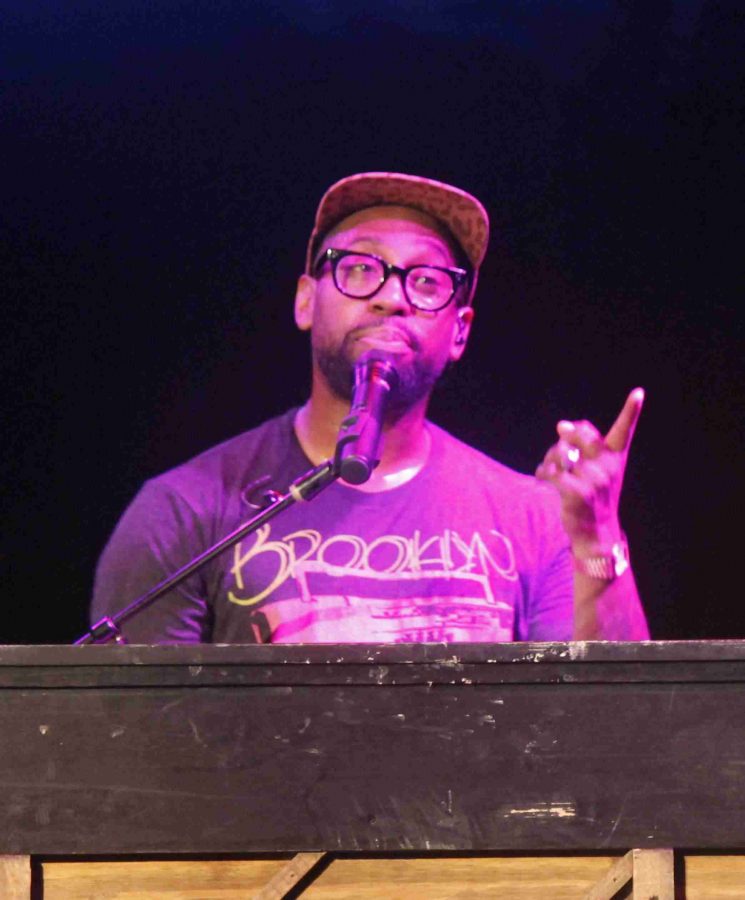 PJ Morton played for over an hour in what was his second appearance at The Abbey.

Some people may know PJ Morton as the keyboardist in the Grammy Award winning band Maroon 5, but on Friday, July 19 Morton brought his jazz and R&B solo work to The Abbey in Orlando.

Morton and his band were in town on the “Back to New Orleans Tour”  where he promoted his first album since signing with major record label Young Money, “New Orleans.”

The band played for over an hour with Morton singing some of the songs off his newest album including “Only One,” “Lover” and “Work It Out.” At one point during his performance Morton went into the VIP section and handed his father, Bishop Paul S. Morton, the microphone for a verse, that was easily the highlight of the night.

Morton took the stage to a packed house at The Abbey and  after two opening acts the crowd was on their feet for the 32-year old musician out of Louisiana. Morton’s eight-piece band consisted of a keyboardist, two drummers, a guitar and bass player, a trumpet, a saxophone and Morton occasionally on the piano.

The show last Friday was put together by Real People Real Music, which uses its management and booking efforts to bring music lovers artist with talent larger than their fame.

“Bound by no demographic or genre, we focus on real people and real music.” reads a portion of Real People Real Music’s about us section on their website.

Local jazz band, BLUTET was the first opening act on Friday night. The band played songs from their debut album “Blues From The Underground”, which was released back in April.

The band warmed up a soggy crowd that had just been out in the Florida rain with their jazzy sounds and melodies, while also bringing up a singer midway through their performance to add some lyrics to the mix.

BLUTET is a five piece band that consist of former Valencia College music professor Jarritt Sheel on trumpet, Derrick Harvin on the trombone, John Toney on bass guitar, Derek Engstrom on the drums and Bryan Mays on guitar.

“The place where jazz meets hip-hop.” reads the BLUTET’s motto on their ReverbNation website.

Comedian Dee Lee was the second opening act of the evening and he kept the crowd attentive and laughing until Morton and his band were ready to go on stage.

All together Real People Real Music put together a phenomenal show that gave the audience a little bit of everything, you started with some blues from BLUTET, some comedy from Dee Lee and then to top it all off PJ Morton gives a performance unlike anything I’ve ever seen from an R&B artist.

Now that Morton’s solo tour has wrapped up he will be rejoining Maroon 5 on the road starting September 13 for the Honda Civic Tour. Morton will be joining the band once they begin the Florida stretch of their tour, which starts in Tampa at the MIDFLORIDA Credit Union Amphitheatre at the FL State Fairgrounds.