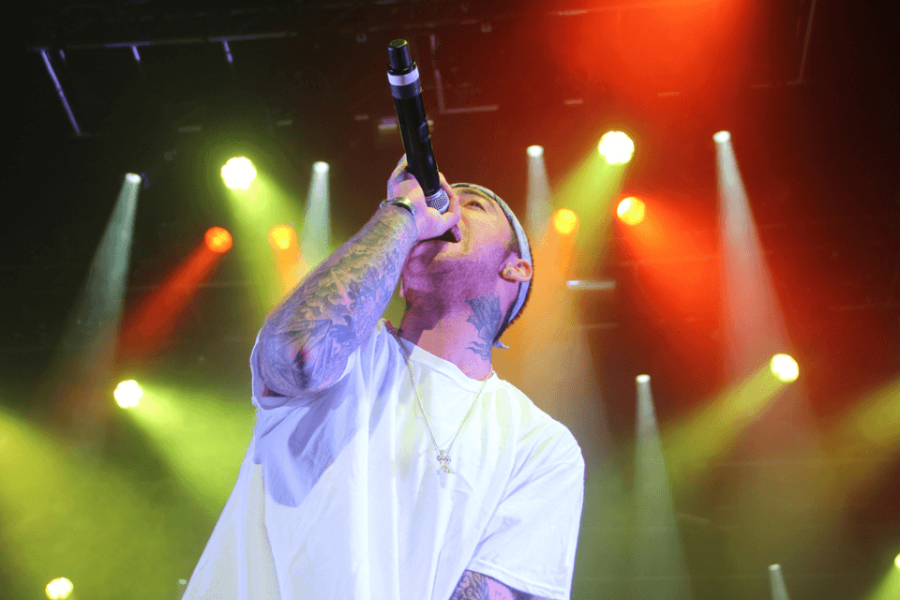 If you were to ask Mac Miller how is life treating him he would probably respond, “three years ago to now, it’s just not the same,” as the Pittsburgh MC looks to sonically attain equal if not greater commercial success with his newest album Watching Movies with the Sound Off as he did with his debut project, which became the first independently-distributed debut album to top the charts in over a decade and a half.

Since then Miller has not stopped building his brand; obtaining his own reality show with MTV — Mac Miller and the Most Dope Family, improving his production skills producing records for multiple artist and starting his own record label, REMember Music, named after a friend of his who recently passed away.

A rap show that contained a lot singing packed the Hard Rock Live Orlando; as a diverse crowd made up of hypebeast, teens, hipsters, and soccer moms came out to do something crazy with Miller and friends last Saturday for the “Space Migration” tour.

As the lights dimmed, smoke rose and intergalactic intro music played aloud in the background; all that could be seen in the crowd were cell phone lights as everyone waited for the Most Dope front man to appear.

“When I say Mac, you say Miller!” chanted his DJ before dropping “Loud” — the hit single off the Macadelic mixtape — as the Pittsburgh MC appeared out of darkness sporting a purple and white bandana to coincide with a crispy white tee and pair of purple jeans as he steam blasted from out of the front of the stage. (In the words of Miller’s good friend Schoolboy Q, it’s safe to say the young artist is “eating” as the 21-year old was decked out in gold from his neck to his wrist.)

Many artist change clothing during their sets, Miller took it to another level switched stage designs. For the first half of the show, he was was backed by hype man — Tree Jay and DJ-DJ Clockwork, providing a party type atmosphere performing fast raps songs dating all the way back to his “K.I.D.S” mixtape as he energetically moved from one side of the empty stage to the other.

Half way though his act Miller seemed to calm his performance down as he sipped from a cup of Jameson, performing in front of candles, a star spangled banner and a trippy light show which created a psychedelic vibe as he and band — The Internet made songs like “Objects in the Mirror” and “REMember” sound more sentimental than they already were.

T.Y.’s Moments of the Night

1. Chance the Rapper a.k.a. Mr. Acid Rap is a fan favorite however a photographers worst nightmare; the young charismatic artist does not stand still.  Chance has the stage presence of an artist who has been in the game for over a decade; blending rock band stage tactics into hip-hop performance is truly something worth viewing. In his 30-minute set, Chance performed songs from both his projects “Acid Rap” and “10 Days Off” keeping the crowd engaged throughout the entire performance proving he is one of hip-hop’s finest “Juke” dancers. Although he is new to the music scene, there were a good amount of Chance followers in the crowd reciting his music.

2. Miller showed off his musical skills in true Woodstock fashion. At one point during the show he took his guitar and began playing it behind his head alongside the band. However he did not stop there, following the play of a sample “How Does it Feel” by D’angelo on the keyboard; he broke into an acoustic performance of “Youforia.”

1. Missed first two opening acts due to Universal Orlando security at City Walk which sucked because I was really interested in seeing Vince Staples perform.  After a 10 minute delay the front gate eventually got in contact with dispatch who relayed the same message I gave to the rent-a-cops when I first got there.

2. The Internet’s individual performance was bland. Syd the Kyd is a great singer however I don’t think she knows that. At times it was hard to hear her as if she was not singing in the microphone. Would have been great to see her test her vocal range more or the band experiment with some new sounds during their own set and not when they were just backing Miller.

Very compelling show. Whether “hip-hop heads” like it or not the genre is moving in a new direction. Fans are looking for artist who can take what they are doing in the studio and transition it over to the stage. Miller and friends truly provided an out of the world experience anyone could enjoy.