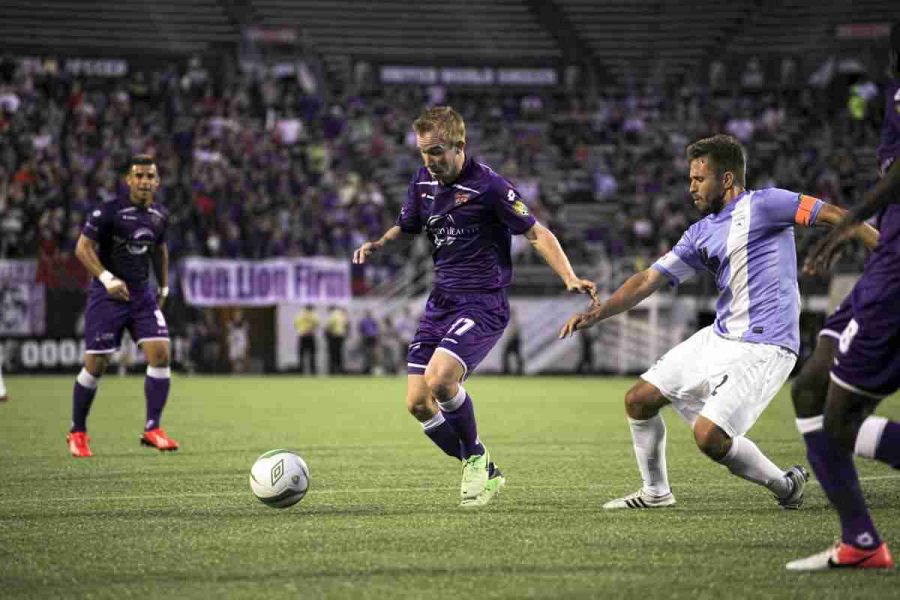 ORLANDO — Dom Dwyer spurned Orlando City on to victory 4-1 against the Wilmington Hammerheads on Saturday, May 25 at the Fifth Third Bank Field at the Citrus Bowl, after he scored a brilliant free-kick in the 24 minute by placing it in the top corner of the net.

Dow Dwyer said about the free kick, “ I saw the wall was pretty big and it was close and it was about like 20 or 21 yards get it up and over and it went in. It is good to tie the record and obviously I want to beat it by a lot and smash it.”

With that goal, Dwyer tied a three year USL Pro record with 13 goals in a season and he is only through 12 games in this season. The person that set the record in 2011 is Jhonny Arteaga, who played for FC New York and scored 13 goals in 21 appearances while playing for the team in 2011.

Head Coach Adrian Heath said, “ I haven’t enjoyed watching us this evening, I thought we were to loose in possession, I thought our desire to keep a clean sheet was very poor and we are better than that. I know how well we can play and I decide what the standards our and what the level is not them or the result and tonight I have been disappointed with quite of bit of our game and if we play like we did tonight against Colorado on Tuesday night we will get a heavy defeat.”

Orlando increased its’ tally in the 39 minute when, Jamie Watson and Bryan Burke played a give and go with each that Watson slotted home for the goal, which was his fifth goal of the season.

Orlando in the first half was in command and control of the scoring and possession of the ball as they took a 2-0 lead into the half.

In the second half, it didn’t look any different as Orlando played just as dominant in the first half.

Bryan Burke in the 52 minute put the game out of reach with his first goal of the 2013 USL Pro season to make it 3-0 Orlando.

Orlando later on the second half started to play a little sloppy and in turn gave up a goal in the 68 minute when Paul Nicholson strikes the ball into the bottom left beating goalkeeper Miguel Gallardo making the score 3-1 Orlando.

Orlando added another goal in the 87 minute when Luke Boden whipped in an early cross into the box and Robert Valentino snaps his head to smash the cross into the near post and make it 4-1 Orlando.