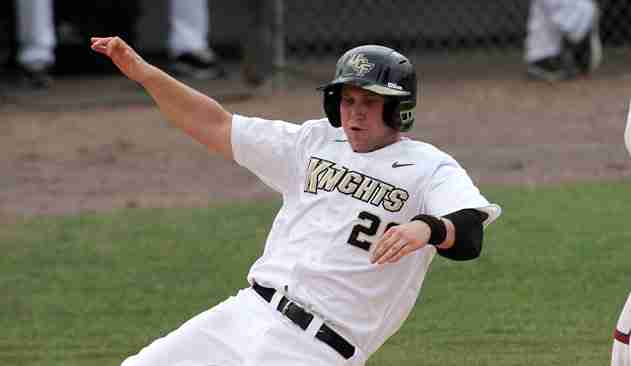 Chris Taladay went 2-for-5 with a run scored and a run batted in on Saturday.

ORLANDO — Andrew Garner, Brandon Boudreaux and Cameron Burns provided plenty of offense as the Tulane Green Wave defeated the UCF Knights 15-9 at Jay Bergman Field on Saturday, May 11. The player on fire in the game was Garner, who hit for the cycle Saturday, going 5-5 with two doubles, a home run, a triple, seven rbis and two runs.

“We call it no rebounds that is a term we use a lot meaning when we score a couple you got to put up a zero and we certainly didn’t do that,” said UCF head coach Terry Rooney. “We battled back and hung in there and then we didn’t put up a zero and I told the pitchers listen we gave up 15 runs, again if we take away two or three pitches we could of have the tying run at the plate and if we didn’t up those four runs in the ninth would should could, but could have the tying or winning run at the plate.”

Tulane scored early in the first, when Sean Potkay singled to right which drove in Richard Carthon to make the score 1-0 Tulane.

The Green Wave then added to their lead when Boudreaux reached on a fielder’s choice, which drove in the runner Nick DiMaggio to increase the lead to 2-0 Tulane after the top of the first.

UCF answered Tulane’s runs with two of their own to tie the game. Bret Gordon was hit by a pitch with the bases loaded and Erik Hempe scored to cut Tulane’s lead to 2-1. UCF tied the game when James Vasquez was walked with bases loaded to advance Chris Taladay home to score another run.

The Knights in the bottom of the second took a 4-2 lead off a home run to straightaway center field by Erik Hempe and a triple by JoMarcos Woods, who later advanced home on a passed ball to make the score 4-2 and gave UCF it’s first lead of the game.

The Green Wave retook the lead in the top of the fourth with a big three run inning to take a 5-4 lead in the game because of Garrett Cannizaro’s sac fly and Garner drove in the other two runs with a double in the inning.

UCF tied the game on Chris Taladay’s single, which drove in Spencer Haynes to make the game 5-5 and Taladay then advanced to second. After that this was the closest the Knights were as Tulane’s offensive exploded for some more runs and UCF couldn’t keep up.

Tulane scored two more runs in the top of the fifth, when Burns doubled down the left field line which drove in Boudreaux and Bowen Woodson.

The Green Wave also scored two runs in the top of both the sixth and seventh inning. The runs in the sixth were scored by Boudreaux and Woodson each driving in a run and in the seventh Garner drove both runs in by hitting a triple to center field to make the score 11-5 Tulane.

Tulane add to their lead by scoring four runs in the top of the ninth inning to open up a gap on UCF. The Green Wave scored those runs by a three run homer by Garner and a sac fly by Tucker Oakley.

The Knights battled back, but it wasn’t enough as they scored three runs in the ninth to make it 15-9.

UCF will play their last home game of the season when they finish up the series against Tulane on Sunday, May 12 at Jay Bergman Field. The series finale will also be Senior Day for the Knights, where they plan on honoring the 10 seniors from this years team. First pitch is scheduled for 11:00 a.m.