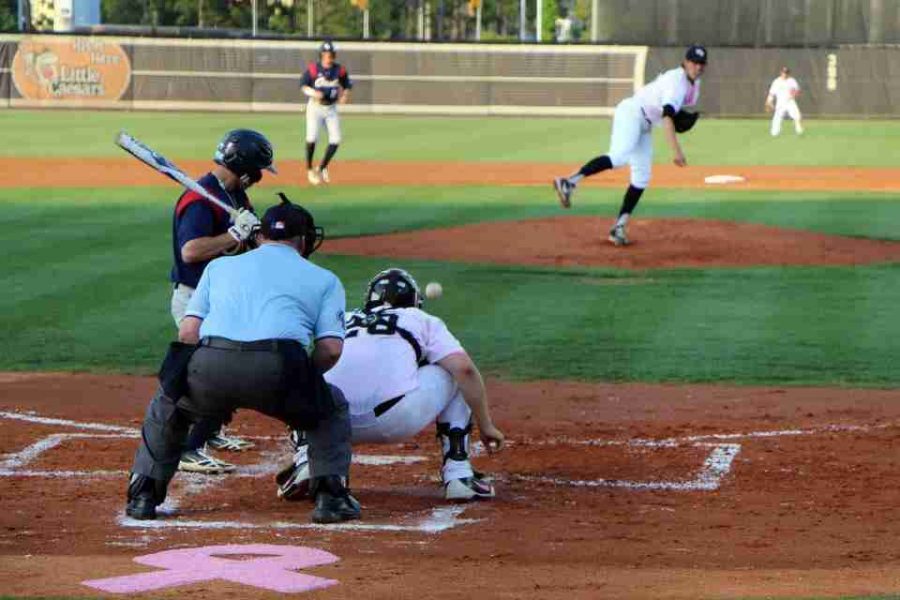 ORLANDO – Ricky Santiago, Mitch Morales and Tyler Rocklein led the way for the Florida Atlantic Owls as they routed the University of Central Florida Knights 10-2 at Jay Bergman Field on Tuesday, April 16.

“The story of the game was our lack of pitching, you know we’ll continue to give up free passes when I say free passes,” said UCF head coach Terry Rooney.

The Owls got off to a quick start on the road as they scored three runs in the first inning off of UCF. Starting pitcher Brian Adkins rattled them early and Adkins eventually got pulled after only going 0.1 of an inning and giving up four hits, three runs and three earned runs.

The scoring play for FAU in the first was thanks to Rocklein, who doubled to left field which scored Brendon Sanger and Geoff Jimenez.

UCF finally got on the board in the bottom of the third, when Brett Gordon hit his first home run of the season to trim the deficit to 3-1 FAU.

“Tonight for us it’s all about the pitching. We’ve got to find a solution to guys competing on the mound,” said Rooney.

The Knights scored again in the bottom of the fourth, when Austin Johnston came up to bat with runners on third and second, flying out to center field for a sacrifice fly and a RBI as Chris Taladay scored to cut the lead to 3-2 FAU. That is the closest UCF got to FAU as the Owls went on an explosive tear offensively the next five innings.

In the top of the fifth, Billy Endris walked with the bases loaded and Sanger scored to make 4-2 FAU. Then, Mitch Morales drove in Santiago and Rocklein to make it 6-2 FAU and put a cushion between the two teams.

FAU added to their lead in the top of the sixth when Sanger reached on a fielder’s choice and advanced to second on a wild pitch which scored Nathan Pittman and Nicholas Worrall and was driven in by Sanger to make the game 9-2 Owls over the Knights. This put the game out of reach for the Knights as all game long their pitching let them down and they couldn’t hold FAU when they needed it the most.

The Owls increased their lead in the seventh, when Jimenez grounded out to second, but drove in Morales who scored to make it 10-2 and continue the bleeding for UCF all game long.

FAU combined for 10 runs and 15 hits, while UCF had only two runs, seven hits and two errors.

UCF next play conference opponent Marshall in a three game series at Jay Bergman Field that starts on April 19.