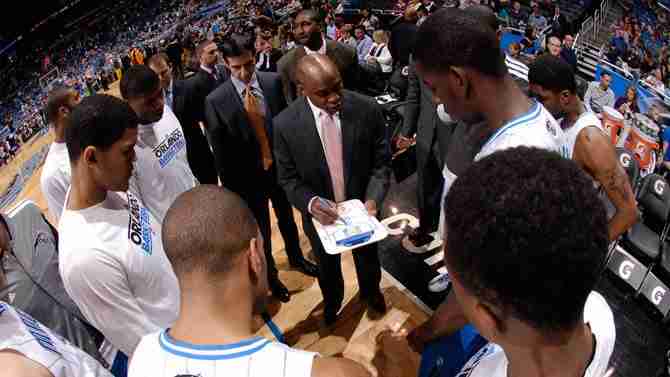 ORLANDO – The Orlando Magic finished off their 2012-2013 home schedule with a 102-84 loss to the Chicago Bulls on April 15. The Magic finished the season with 12 wins out of the 41 games at the Amway Center this season while going a rough 3-19 at home versus potential playoff teams. If Orlando has any chance of improving their chances of making the playoffs over the next couple of years, they will have to play much better against the best teams in the league at home.

There is a lot that Orlando can learn from losing against good teams like the Chicago Bulls. Coach Jacque Vaughn can review the games and teach his team about becoming better overall and the players can also go back and watch and learn how the best teams play.

“It’s a great thing that over the summer I’ll be able to reference a lot of these games,” said Vaughn. “I think once the season ends the building really begins as far as the off season is concerned and the development will continue.”

While finishing with more wins at home, there was a consensus around the team that they played better on the road.

“It’s weird; I think we play a little bit better on the road sometimes,” said Maurice Harkless. “I don’t know why, but we have to learn how to take care of home and win games.”

Orlando was constantly blown out of games this year while they were home. There would be stretches where the Magic were unable to get anything going and a way for that to change is if next season the crowd would get involved more, in essence feeding energy to the players and encouraging a home court advantage.

“I think that’s a big impact for us as a team, just using the home court advantage and the crowd that we have by feeding off of them,” said player Tobias Harris.

The final home game of the season was also fan appreciation night. Vaughn took his team to center court after the game as the players applauded and gave thanks to the fans that stuck around with the team the entire year.

“Without a doubt, just the people who were still there at the end of this game. It’s been that way more than a few times. Multiple times throughout the course of the year staying until the end of games and that’s just unbelievable support. It was just our small gesture of saying thank you for being there for us the entire year,” said Vaughn.

Next season the Orlando Magic will celebrate their 25 year anniversary and in honor of their “silver season,” the Magic will wear a commemorative logo and go out on a campaign in Orlando to help celebrate 25 years of Magic basketball.