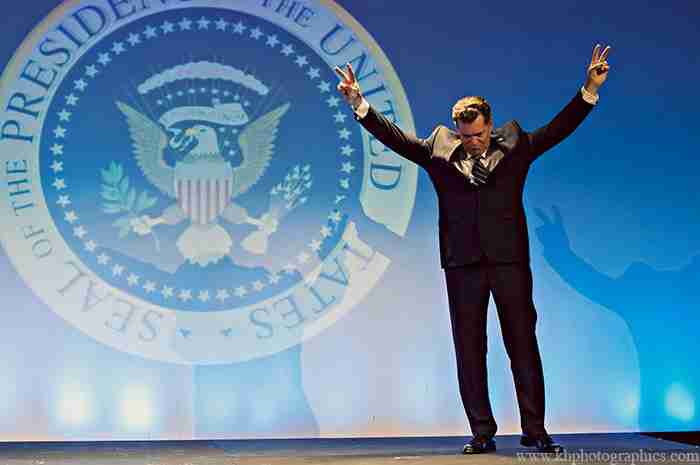 ORLANDO — More than just live entertainment, the play “Frost/Nixon” breaths new life into one of the biggest political scandals in U.S. history, and gives another side of the story many have never considered.

President Richard Nixon is synonymous with disgrace and defeat, but this play looks into the reason why he fell entwined in his twisted web, and how an unsuspecting Englishman finally got what no one else could.

A confession from Nixon that changed our history and how we look at political power and influence.

“I lived through this, I was just a kid,” said John DiDonna, the plays co-director. “I remember my father watching it on television, so it was like a trip back to my childhood.” DiDonna admitted to becoming emotional watching the great portal of Nixon during the climactic end of the opening night of this production on Friday, April 12.

For anyone not familiar with former President Nixon and the Watergate scandal that brought about his downfall, “Frost/Nixon” is written to explain the scandal. Another benefit is found in its simplicity, focusing more on the people involved and straying away from unnecessary distractions.

Kevin Becker is this play’s other co-director, and helped to divide and reunify different segments, seeing that all the layers of this production came together into a unified vision.

“The vision at the end is a really nice collaboration, and I think that’s one of the best things about this group,” said Becker.

Hit music from 1977 and cast members in polyester shirts set a flashback in time as the play begins with the hypothetical moments preceding the televised remarks of Nixon as he resigned from the office of president. The play’s narrator, James Reston Jr., performed by John Bateman, then works to establish historical context and an intellectual tone that will follow the drama and comedy that fills this production.

The play then moves to define the complex men who become the driving force of this story; David Frost, played by Timothy Williams, and Richard Nixon, played by Stephan Jones.

“I share a lot in common with Frost,” said Williams. “He just enjoys being on stage and he enjoys being in front of the camera, and I took a lot of inspiration from those things that I share with him.”

John DiDonna approached Williams around two years ago about playing Frost, and this was his first time performing this role in his 30 years of acting experience.

“It’s interesting because he is an iconic figure who is often lampooned, so you gotta be careful about that,” said Jones on his portrayal of Nixon. “We have to be careful about how we respect the integrity of the man and who he was.”

Williams’ portrayal of Frost is full of energy and life, despite having Frost’s world crumble around him due to the huge financial and professional risks he took filming this landmark interview with the former president. Jones’ portrayal is also fantastic, with every word and movement clearly defined to create as realistic a representation of Nixon as possible.

Both men share a personal struggle to reclaim the professional heights they once knew and work against one another throughout the interview for that purpose. In the end only one of them will succeed, the other will be left to the wilderness.

This 90-minute play runs through the historical gambit with ease all while keeping the audience’s attention with brilliant acting and a surprising amount of comedy. All this culminates into a political showdown that will make or break the men at its forefront.

“Frost/Nixon” will be performed on select days until Sunday, April 28, at the Mandell Theater in the John and Rita Lowndes Shakespeare Center in Loch Haven Park. Shows will begin starting at 8 p.m. on Fridays and Saturdays along with Sunday matinee performances starting at 2 p.m. There will also be a special industry night performance on Monday, April 22 at 8 p.m.

Tickets are $20 for general admission and $15 for students and seniors with cash only at the door, and group rates are available for 10 or more tickets purchases. For more information on credit card pre-orders visit www.redchairproject.com and reservations can be made by calling 407.328.900.