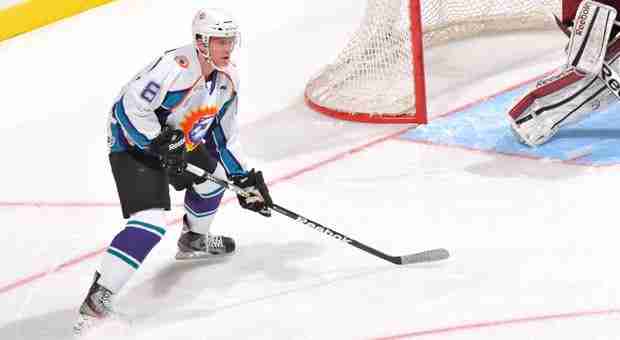 ORLANDO – Will MacDonald scored his first-ever professional goal as the Florida Everblades defeated the Orlando Solar Bears 3-1 to spoil their last home game of the season on Wednesday night, March 27 in front 8,558 fans at the Amway Center.

Florida came close to ending Orlando’s last home game with a shutout leaving Orlando scoring any goals but the Solar Bears would prevail to put one up on the scoreboard and leave the fans with appreciation instead of disappointment.

“This is the best city in the East Coast, one of the best cities in the American Hockey League,” said Solar Bears head coach Drake Berehowsky.

“It’s a first class building, we have a first class organization, and the fans have responded well. We sure appreciate it and it’s humbling to come out here.”

The first period concluded with the Solar Bears playing catch up with the Everblades striking first as forward Matthew Pistilli scored with 14:21 remaining in the period to give Florida a 1-0 lead.

After two periods of Everblades dominance over the Solar Bears, they will contain a 2-0 edge over Orlando outshooting them 24 to 18 to enter the third period.

Left Wing Matthieu Roy gave Florida a 3-0 lead that insured a certain shutout until Solar Bears captain Ryan Cruthers scored a goal assisted by center Dale Mahovsky in the third period with 11:11 left in regulation, but were prevented on adding anything else to a comeback as they lost their last two home games.

“We wanted to put on a show for them,” said Cruthers on leaving the fans with a potential victory. “It’s something we talk about each game and putting on a show for them, and trying to get them a win, leave them with a good taste in their mouth.”

Orlando would go ahead and give it one last effort to score another goal, but Florida would hold them down like they did all game with playing lockdown defense and let the buzzer sound with no extra damage.

Three newly added players for the Solar Bears made an appearance in the final game, Colton Jobke, Joel Broda, and Joe Marciano. Bryce Merriam made his first start at goaltender for the season and allowed three goals.

During pre-game presentations, Orlando’s C.J. Severyn returned to the team as he was playing for nonaffiliated Charlotte Checkers and received the Solar Bears MVP award for the season as he scored 21 goals, and had 21 assists to make a total of 42 points.

Once the game ended, the Solar Bears took one last standing ovation from their hometown fans as they were applauded and cheered for the season that was given to them, the city of Orlando, and hockey fans in Central Florida.  The team skated around the rink to thank the crowd for all the support that was given to them this season.

The Solar Bears have two games remaining on their schedule that are on the road at Florida to finish off their rebirth season with games being on Friday the March 29th and Saturday the 30th.