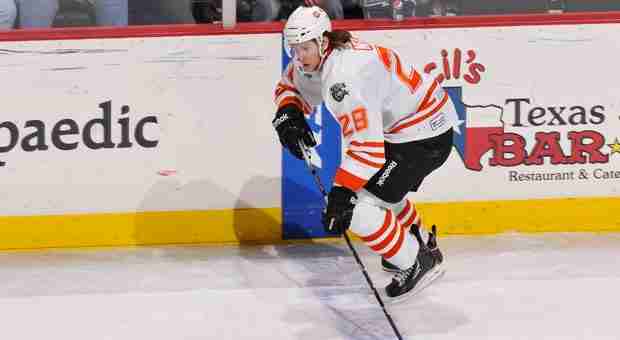 ORLANDO – Michael Neal scored three goals giving him his first hat-trick of the season, but it wasn’t enough as the Orlando Solar Bears lost to the Florida Everblades 8-3 on Tuesday, March 26 in front of 6,701 at the Amway Center.

Everblades forward Corey Trivino also had a hat-trick during the game, scoring three goals and adding one assist on four shots for Florida, while teammate Mathieu Roy finished the game with two goals and three assists.

“We gave them a lot of goals,” said Solar Bears head coach Drake Berehosky. “We turned pucks over, our gaps weren’t that tight. We didn’t play the way we wanted to come out and play.”

Neal gave the Solar Bears an early 1-0 when he scored his 10th goal of the season with 15:34 left to play in the first period, but then Trivino tied the game at 1-1 with 14 minutes remaining in the opening period.

“I think it was a little bit overdue for sure,” said Neal after the game. “I’ve been struggling the past 15 games or so and I think it just comes down to squeezing the stick too tight.”

Roy gave Florida a 2-1 before Adam Brace extended the lead to 3-1 when he scored his first professional goal with 11:37 remaining in the second period.

The Everblades used five third period goals to finish off their fifth win of the season over the in-state rival Solar Bears and improve their record to 36-22-4-7 for the season.

Neal scored two goals in the final period finishing off his first hat-trick of the season, while Solar Bears’ goalie Patrick Killeen blocked 6-11 shots in net during the period.

“Killeen played well,” said Berehowsky of his goalie’s performance. “He gave us a chance the first two periods and it’s unfortunate we let him down in the third.”

The Solar Bears finished the game being out shot 35-25 by the Everblades, while also spending ten more minutes in the penalty box than their rivals from down south.

With the loss, Orlando’s record falls to 28-34-3-4 on the season and 20-10-1-4 at home. The Solar Bears will finish the home portion of their schedule on Wednesday, March 27 against the Everblades at the Amway Center before traveling to Estero to finish the season with two more games against Florida.

“We want to win,” said Neal on Wednesday’s final home game. “We’re going to go over some tape tomorrow, obviously everybody’s a little frustrated with this 8-3 loss, but hopefully there are a few positives out of it and we’ll go get em tomorrow.”