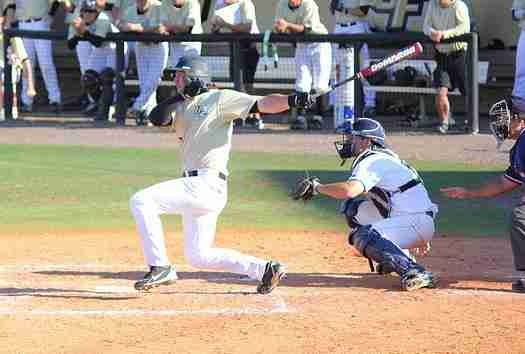 ORLANDO – James Vasquez went 4-4 with a run scored but it wasn’t enough as Columbia University defeated the University of Central Florida Knights 5-4 on Saturday, March 16 at Jay Bergman Field on the UCF Campus.

Danny Davis started the game on the mound for the Knights, making his fifth start of the season after going 3-0 with a 2.70 ERA during his first four starts.

Columbia got it’s offense going early when it scored two runs in the top of the first inning to jump out to a 2-0 lead early in the game.

“Credit Columbia,” said UCF head coach Terry Rooney after the game. “They deserved to win, they played better than us, they made more plays, they threw more strikes, and they got a few more hits than us.”

Joey Falcone then hit into an unorthodox double play in which he reached base on an error by Davis which allowed Williams to score from third giving Columbia a 2-0 lead, but was then thrown out at second after Ferraresi was thrown out trying to score from second base.

“Defense played a big role,” said Rooney about the two unearned runs. “You walk six guys and you make three errors, you’re not going to win a lot of games, it’s plain and simple.”

UCF’s bats remained quiet until the sixth inning, when the Knights took a 3-2 lead thanks to a Parker Webster RBI double to left center field with the bases loaded.

The Lions regained the lead in the top of the seventh when Ferraresi came up with one out and runners on first and second, and cleared the bases with a double to left center field, giving Columbia a 4-3 lead.

The Knights tied the game at 4-4 in the bottom portion of the inning when Tommy Williams walked to leadoff the inning and later scored on a single by Vasquez after the second baseman made a throwing error allowing Williams to score from first.

Columbia took the lead for good in the eighth inning when Serena hit a double to left of off Spencer Davis, scoring Silbar from second to give the Lions a 5-4 lead.

UCF got the leadoff man on base to start the ninth inning, but Alex Black retired the next three hitters he faced to record his first save of the season for Columbia.

With the loss The Knights snap a five-game winning streak and have their record fall to 12-8 for the season.

“Tomorrow we need to play better,” said Rooney about the final two games of the series. “ Brian Adkins is on the mound and he’s going to bounce back. At the end of the day we may have to pitch a lot of guys in these next two days.”

UCF and Columbia face off again on Sunday, March 17 at 1:00 p.m. for the third game of a four game series between the two teams.