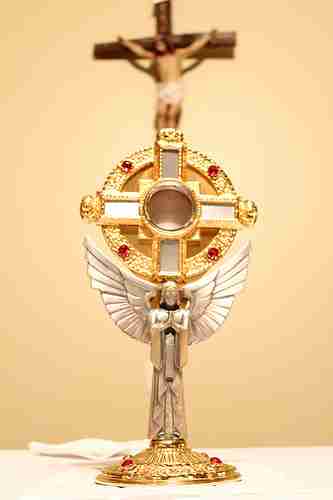 ORLANDO — Students from the University of Central Florida and other local colleges joined in spirit with Catholics around the world to celebrate the selection of their new leader Cardinal Jorge Mario Bergoglio of Argentina — Pope Francis.

“It is extremely exciting, it’s unexpected,“ said Tony Marco, lay campus minister for Catholic Campus Ministries at UCF. “We knew the conclave was going on, but with the pope being elected so quickly it’s definitely a blessing.”

Marco and others got the word that white smoke had appeared hours before the meeting. When the new pope was chosen, they quickly sent out messages to as many people as possible to get them to come out to celebrate.

The pope is the leader of the Catholic church and typically this is not a change over that happens very often.

The event that was held by this group called “Knight Fire” is scheduled for every Wednesday and is focused on prayer, fellowship and study of the faith. Those in attendance sang a few songs and then engaged in small group activities, with this week’s itinerary focused on rooting out sin in honor of Lent and in reflection of Easter, March 31.

A special element was added to this service with an unexpected display of a Monstrance. Inside this was a Eucharist, which Catholics believe is the true presence of Jesus as a blessed sacrament and worthy of worship. This was a piece of bread that was blessed at their mass service, placed inside a golden cross and presented as a source for Catholics in attendance to perform their devotion.

“It’s the most relaxing and most peaceful feeling to be in the same room as Jesus Christ,” said Sarah Rodriguez, who was also celebrating the new pope as well as her birthday today. “It’s a way for me to clear my mind, and that’s why I try to make it to adoration as often as I can.”

The occasion marks the first time that a pope has been chosen from the Americas.